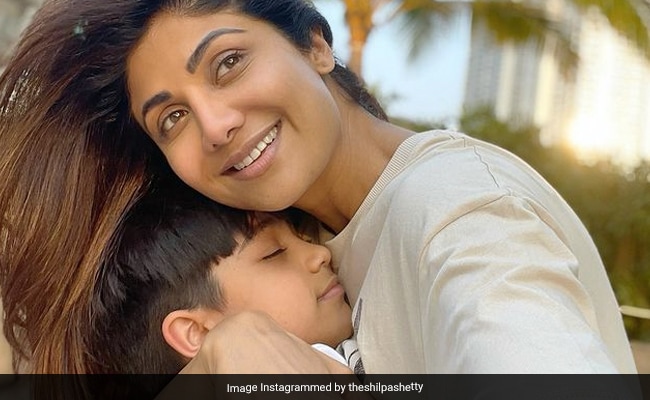 Shilpa Shetty's son Viaan turned 9 today and the actress has the most adorable present for him. On Viaan's birthday, Shilpa Shetty and her husband Raj Kundra, have welcomed a new family member - a puppy. The actress recorded her son's reactions as she surprised him with the puppy and shared the video on Instagram. In the video, Shilpa Shetty and Raj Kundra, can be seen walking towards their son, who was asked to sit with his "eyes closed and hands out." Shilpa can be seen carrying the puppy in her hands before she hands it over to Viaan. The 45-year-old actress introduced her "new family member" on Instagram and shared that she has named it Truffle. Sharing the video on Instagram, she wrote: "Introducing "TRUFFLE" our new family member. Viaan's been begging for another pet and I promised him, would get him one when he'd turn 10 and can look after it. He's earned it a year earlier, been such a good boy. Happy birthday my darling # truffle #birthdaypresent #love #gratitude #birthday."

Shilpa Shetty's post received several comments from her fans as well as other celebrities. "Awwww so cute," commented Neelam Kothari. Sophie Choudry wrote: "Omgggg" and complemented it with many heart emojis.

Earlier in the day, Shilpa had shared an old video of Viaan from his fourth birthday. She poured out her love for him in the long emotional caption of the post. "There's so much to say, so much to do...You're growing up too fast, I'm not even done hugging you," she wrote.

Shilpa Shetty got married to Raj Kundra in 2009. They welcomed their first child Viaan in 2012. Last year, the actress made a surprise announcement on social media, in which she revealed that she had welcomed her second child, a baby girl named Samisha to her family.