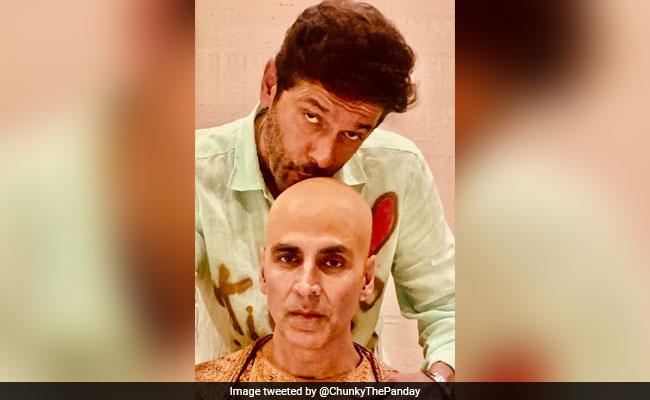 All actor Chunky Panday, wanted to do was celebrate his 33 years of working with Akshay Kumar but the Bollywood khiladi, known for the prankster he is, trolled Chunky and how! Chunky shared an adorable photo from the Housefull 4 trailer launch, in which he can be seen kissing Akshay Kumar's 'bald patch' (courtesy prosthetics). Chunky Panday, who has featured in the Housefull films as the hilarious character Aakhri Pasta, reprises his role in Housefull 4 as well. Drawing a reference to his role and Akshay Kumar's character named Bala, Chunky Panday wrote: "Batman and Joker, Bala and Pasta. 33 years, four films and a million memories. Thank you, my friend Akshay Kumar." Aww, that's sweet.

But you know what Akshay did? He Chunky with an "overacting" meme. LOL.

Housefull 4 is a reincarnation comedy, which shuttles between these two timelines - 1419 and 2019. The recently launched trailer introduced two versions of each cast member, like Akshay Kumar was a warrior named Bala in 1419 while he's Harry in 2019. Major confusion unfolds as Akshay Kumar, who can remember the happenings of his past life as Bala, suddenly realises he is engaged to be married to Pooja Hegde, who is Pooja now. Modern day Riteish's love interest in the film is Kriti Kharbanda, who is Neha now where as the 2019 version of Bobby Deol is in love with Kriti Sanon, who is Kriti in this life. Kriti Sanon was Akshay Kumar's bride-to-be in his previous life.