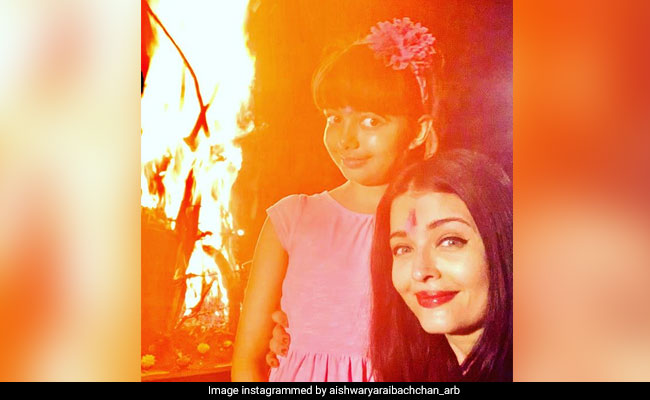 Happy Holi folks! It is that time of the year again when people make their lives more colourful by celebrating Holi to the fullest. On the occasion, Bollywood celebrities also extended their wishes and believe us when we say that pictures from Aishwarya Rai Bachchan and her daughter Aaradhya's Holi celebrations will bring a smile on your face. On Monday, the actress posted a set of photos of the mother-daughter duo celebrating Holika Dahan and wished her fans with a sweet message: "Happy Holi to all. Love and light." In the pictures, Aishwarya happily poses with Aaradhya, who looks pretty in a pink frock and a matching hairband. The duo look adorable together.

A post shared by AishwaryaRaiBachchan (@aishwaryaraibachchan_arb) on Mar 9, 2020 at 9:30am PDT

Aishwarya Rai Bachchan always delights her fans by sharing pictures of herself and her daughter. Remember the post she shared on Valentine's Day? It was too sweet. The actress posted selfies with her actor husband Abhishek Bachchan and Aaradhya. In case you haven't seen her post yet, take a look:

A post shared by AishwaryaRaiBachchan (@aishwaryaraibachchan_arb) on Feb 14, 2020 at 10:52am PST

A post shared by AishwaryaRaiBachchan (@aishwaryaraibachchan_arb) on Feb 14, 2020 at 11:01am PST

A post shared by AishwaryaRaiBachchan (@aishwaryaraibachchan_arb) on Feb 4, 2020 at 12:35pm PST

On the work front, Aishwarya Rai Bachchan was last seen in the 2018 musical film Fanney Khan, in which she co-starred with Anil Kapoor and Rajkummar Rao. She has also dubbed for the Hindi version of Disney's Maleficent: Mistress Of Evil. Aishwarya Rai Bachchan will next be seen with Abhishek in Anurag Kashyap's upcoming film Gulab Jamun.