The film went on floors in Chennai on Thursday 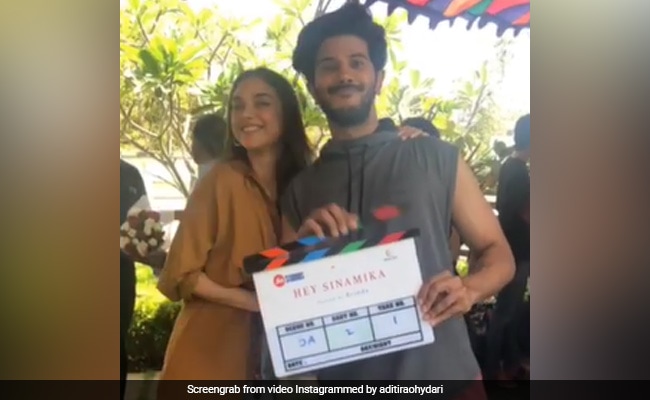 Aditi Rao Hydari and south star Dulquer Salmaan are all set to co-star in the upcoming Tamil film Hey Sinamika. The film will mark the directorial debut of south choreographer Brindha Gopal and will also star Kajal Aggarwal. Announcing her association with team Hey Sinamika, Aditi shared a photo with Dulquer and Brindha Gopal and wrote: "To new beginnings... All smiles. #HeySinamika." She also posted a boomerang, which features her having a lot of fun with Dulquer Salmaan. "Homie and I," she captioned the clip. The film went on floors in Chennai on Thursday. Sharing pictures from the set, which also feature filmmakers K. Bhagyaraj, Mani Ratnam, his actress wife Suhasini and producer-actress Khushbu Sundar, Dulquer Salmaan tweeted: "The magic of new beginnings! Starting the journey of #HeySinamika with some lovely ladies Aditi Rao Hydari, Kajal Aggarwal and under the guidance of my dearest Brindha master!"

The magic of new beginnings ! Starting the journey of #HeySinamika with some lovely ladies Aditi Rao Hydari, Kajal Aggarwal and under the guidance of my dearest Brinda master ! @jiostudios@dulQuer@aditiraohydari@MsKajalAggarwal@brindagopal@JioCinema@globalonestudiopic.twitter.com/YvWDH19Neo

It has been reported that the film's title - Hey Sinamika - is inspired by the track Aye Sinamika from Mani Ratnam's 2015 film OK Kanmani. Hey Sinamika will be produced by Jio Studios in association with Global One.

On the work front, Aditi Rao Hydari made her acting debut with the 2006 Malayalam film Prajapathi. She has featured in a number of Hindi, Telugu, Tamil and Malayalam movies, including Wazir, Rockstar, Padmaavat, Sringaram, Chekka Chivantha Vaanam and Fitoor. Her upcoming films are The Girl On The Train, Sufiyum Sujathayum and Ponniyin Selvan.

Dulquer Salmaan has worked in several Malayalam films such as Ustad Hotel, Theevram, Pattam Pole, Salalah Mobiles, Vikramadithyan and Jomonte Suvisheshangal. He made his debut in Bollywood with Akaarsh Khurana's Karwaan, in which he co-starred with Irrfan Khan. He then went on to share screen space with Sonam Kapoor in The Zoya Factor, his second Hindi film.