'Love You To The Moon And Back,' Dulquer Salmaan Writes In His Anniversary Wish For Wife Amal

"You make me want to be the best version of myself," wrote Dulquer Salmaan 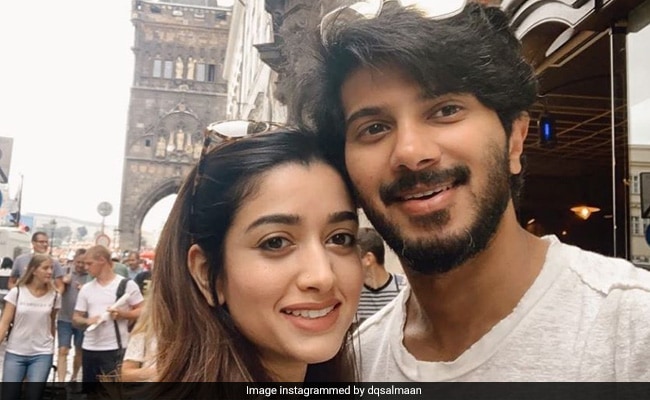 Malayalam actor Dulquer Salmaan, who is celebrating his 8th wedding anniversary on Sunday, made the day all the more special by posting a lovely anniversary wish for his "partner in crime" Amal Sufiya. The 33-year-old actor shared a picture of himself along with his wife Amal from Charles Bridge, Prague and accompanied it along with an equally adorable caption. "8 years? Who would have thought ? Thanks for putting up with me for so long. For being Am. For being mamma. For being Ammayi. For being Amu. Love you to the moon and back. You make me want to be the best version of myself." The Karwaan actor added the hashtags #dQnA #8years #bestmammaever to the post.

8 years ?!!! Who woulda thunk ? Thanks for putting up with me for so long ! For being Am. For being mamma. For being Ammayi. For being Amu. Love you to the moon and back. You make me want to be the best version of myself. #dQnA #8years #bestmammaever #marieseverything #Imaclosesecond #wetwooursM #mypartnerincrime #bonnietomyclyde #iasked #yousaidyes #herewearenow

Amal frequently makes appearances on her husband's Instagram profile and we simply love it when that happens. Check out some of the posts here, you can thank us later.

I know this is a day late but still ! Wishing my dearest Am the happiest of birthdays ! It's a big birthday this year and I love seeing how much you've grown since we first met. From fresh college grad to a young wife to a new mother. You sacrificed and endured so much to give me the biggest gift of my life. And no matter what, I can never do half of what you do on a daily basis from when we knew we were having M. You inspire me to become better and are the voice in my head even if I'm a lost boy who doesn't want to grow up. But no matter how lost or juvenile I am, there's no one I'd rather grow old with than you Amaal Salmaan. You're the love of my life and the mother of my child. I love how that sounds and say it in my head everytime we have a fight ! Ok this is turning into some open love letter. Happy birthday baby #dqnA #hbdwifey #healthychocolatecake #andsomeladdoocake #withbesties #bigbday #thankgodimadeit #universeconspires #iasked #yousaidyes #herewearenow

Dulquer and Amal got married in a private ceremony in Chennai in 2011.The couple welcomed their first child Maryam in May 2017.

Dulquer Salmaan made his Bollywood debut in 2018 with the film Karwaan, in which he co-starred with Irrfan Khan and Mithila Palkar. The Zoya Factor, co-starring Sonam Kapoor and Angad Bedi, marked his second Bollywood project. The film failed to perform well at the box office.

On the work front, the actor has films like Kannum Kannum Kollaiyadithaal, Vaan and Kurup, in the pipeline. The south star in best-known for his roles in films such as Ok Kanmani, Mahanati, Charlie, Bangalore Days and Solo, to name a few.