Hey Birthday Boy Ali Fazal, Are You Listening? Richa Chadha Wants You To...

Reacting to Richa's tweet, when a user wrote: "Happy birthday to your Guddu. Kinda love him," the actress replied: "Me too. Blush" 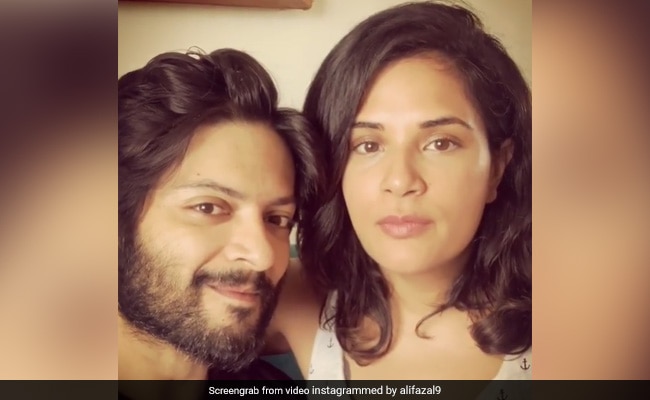 Happy birthday, Ali Fazal! The actor turned 34 on Thursday and on the occasion, his fiancée, actress Richa Chadha, made an epic request. Richa Chadha and Ali Fazal are one of the cutest couples of Bollywood. On Thursday, Richa posted a picture of a magazine cover featuring Ali Fazal as Guddu, his character from web-series Mirzapur and wrote this for the actor: "Happy birthday, soulmate. Phone uthao shot ke baad." Richa also lit up the comments section of her post by dropping a loved-up comment for her fiancé. Reacting to Richa's tweet, when a user wrote: "Happy birthday to your Guddu. Kinda love him," the actress replied: "Me too. Blush." Aww, adorable. Isn't it? Take a look at Richa Chadha's tweet here:

Ali Fazal and Richa Chadha have been together for over five years now. The couple, who got engaged earlier this year, were supposed to get married in April but postponed their wedding because of the coronavirus pandemic.

Richa Chadha and Ali Fazal always give us couple goals by sharing cute posts for each other on their respective social media handles. A couple of days ago, the actor posted a photo of themselves with a quirky note. An excerpt from his caption read: "Yea, I caught cat! Found Cat Woman with her mask off and boom, I was there, see? Annoying lil prick me.... see love, they got to know, you are a super hero!"

Yeaaaaa, i Caught CaTtt!!! Found Cat woman wid her mask off and boom, i was there see? Annoying lil prick me. . see love, they gotz to kno , you is a super hero! The scum the scum the smudge the fudge. 43 goodies, a hoodlum and a judge. attica and lives mattering ( hear em?) Down n out - up and about. The funk's' no match .. Cuddle cushion coco!!! i love you little loco. go sav'em , i go save Mirza. For real???? Ali ? . mean poetry ( yea, thats what we missing in my country- poetry) . Them need no saving. Hehe. love all things defined , because they need smudging. Defination by defination ceases in conformity. The moment u form form you must be ready to dissipate . And if u ready then u hav imagined and if u have imagined, it has created a future.. and therefore, dissolves the mould. So i hear. Ok bye. @therichachadha

Ali Fazal awaits the release of Mirzapur 2, which will premiere on Prime Video on October 23. He is best known for featuring in films such as Prassthanam, Happy Bhag Jayegi, Victoria And Abdul and Bobby Jasoos.

The actor and Richa Chadha, who co-starred in the Fukrey series, will start the shooting schedule of the third instalment of the film next year.