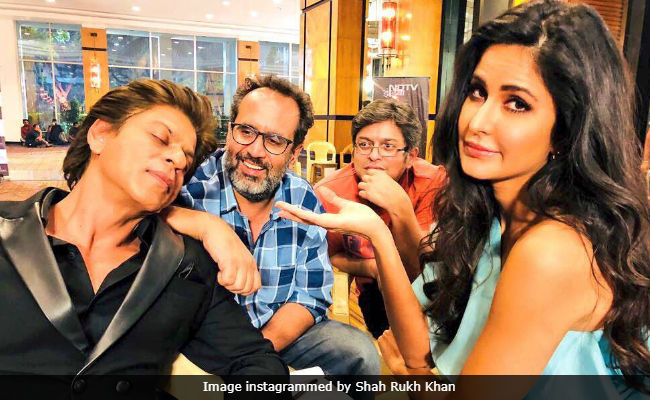 New Delhi: Director Aanand L Rai told news agency IANS that Zero is a "technically and emotionally a difficult film" and that actors Shah Rukh Khan and Katrina Kaif share funny posts referencing each other to lighten up the atmosphere on the sets. Shah Rukh Khan shared a few pictures on social media, in which he said that Katrina is his 'media manager.' Over the weekend, SRK put up a picture of himself reminiscent of a scene from his 1993 film Darr - only Katrina replaced Juhi Chawla. "Katrina is having fun doing all this. I think Zero is technically and emotionally a difficult film, so it required that kind of individuals who can create fun atmosphere on the film set and that is what Katrina is doing. It is so nice of her and entire team to have this kind of atmosphere all around," the director told IANS.

Cos she doesn't eat ice cream in real, Cos she has worked so hard & cos this reminds me of Darr...on @aanandlrai #Zero the film...'I lov u kkkKatrina..' @katrinakaif

Aanand L Rai has big plans for Zero. The director told IANS that after a good feedback for the teaser, which release in January, he wants to deliver more than he's promised. "I am trying to give the audience things which are coming from my heart and with Shah Rukh sir, I think, I am being able to achieve that. The kind of fun we all are having while making this film is what I always look for. I still require two months for the completion of the shoot, but I will ensure that the film delivers more than what it is promising," he said.

Here's the teaser of Zero:

Zero also stars Anushka Sharma and the film is expected to release in December, this year.