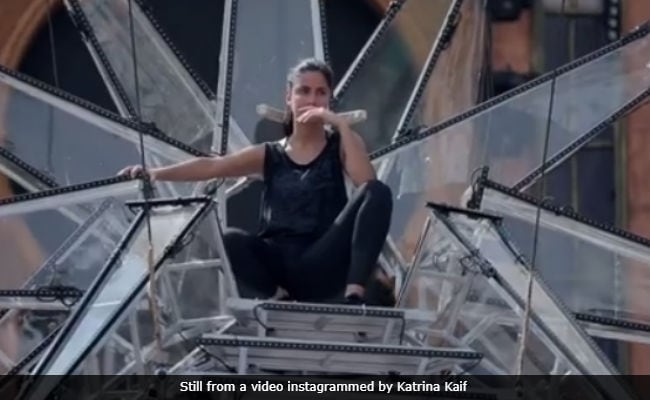 New Delhi: Katrina Kaif is quite fun at work. The 34-year-old actress shared a video of her rehearsal session for an award show, in which Katrina appears to be A) a fast learner and B) fun to work with. Katrina rehearsed with Marzi Pestonji and choreographer Shiamak Davar's crew to Swag Se Swagat, a song from her latest film Tiger Zinda Hai. Katrina mastered the initial steps and wanted to learn the next set, so she quickly goes over the steps with Marzi. The way in which she did that will make you ROFL. Take a look at Katrina rehearsing meticulously:

The above practice session was apparently for Zee Cine awards, which was held on December 30. Katrina posted a picture from the actual performance too:

Swag se kijiye 2018 ka swagat with me at the @zeecineawards, tonight at 7:30 only on @zeecinema. #ZeeCineAwards2018

Here are some other snippets from Katrina's rehearsal:

Rehearsals in the for @zeecineawards zinda hai ...u marzi .. u always make me smile

Making sure I know my steps ..... pl don't miss @danielbauermakeupandhair on the left who has the right steps to the wrong song ...... #swagonhismind

Katrina Kaif's Tiger Zinda Hai, co-starring Salman Khan performed exceptionally well at the box office and crossed the Rs 300 crore mark in the third week of its release. Katrina has a pretty impressive line-up of films in 2018.

Promoted
Listen to the latest songs, only on JioSaavn.com
She will be seen in Yash Raj Films' Thugs Of Hindostan, which will reunite her with Dhoom: 3 co-star Aamir Khan and director Vijay Krishna Acharya. Thugs Of Hindostan also stars Amitabh Bachchan and Fatima Sana Shaikh. The film is expected to release around Diwali this year.