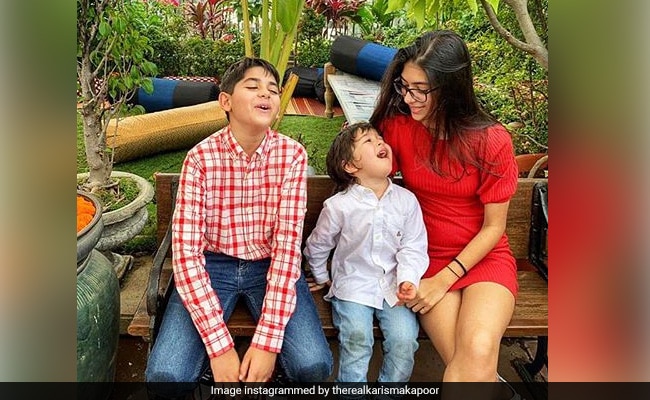 Karisma Kapoor gave us a glimpse of how her nephew Taimur Ali Khan is staying connected with her son Kiaan Kapoor during the lockdown. She shared a screenshot of Taimur and Kiaan's video call on Instagram. In the picture, Taimur could be seen watching his cousin Kiaan during his taekwondo class. Sharing the picture on Instagram, Karisma wrote: "Brothers in lockdown. Tim watching Kiaan during his taekwondo class. New normal ! #purelove #myjaans #family." Later, Karisma's sister Kareena shared the post on her Instagram profile and she wrote: "Loves of my life. #MyBoysInLockdown." Kareena's cousin Riddhima Kapoor Sahni dropped several heart emojis in the comments section, while Sophie Choudry wrote: "Uff that face. So adorable."

On Mother's Day, Kareena posted a super cute picture with Taimur Ali Khan and wrote: "This pretty much sums up mother's day and well... Every other day with Tim. Happy Mother's Day."

This pretty much sums up mother's day and well... every other day with Tim#HappyMothersDay

Kareena Kapoor met husband Saif Ali Khan during the filming of the 2008 film Tashan. They have co-starred in films like Omkara, Tashan, Agent Vinod and Kurbaan. They got married in the year 2012 and the couple welcomed Taimur Ali Khan in 2016.

Karisma Kapoor is the star of Nineties' films like Coolie No 1, Raja Hindustani, Dil To Pagal Hai and Biwi No 1 among others. She was last seen in ALTBalaji's web-series Mentalhood. She was married to Sanjay Kapur from 2003 to 2016 and after their divorce, their daughter Samiera and son Kiaan are living with Karisma. Sanjay Kapur is now married to Priya Sachdev.