What can be a possibly better way to pay tribute to an artist than acknowledging his body of work? A day after Bollywood veteran Rishi Kapoor's death, Amul paid tribute to the actor in its quintessential utterly, butterly topical. On Friday, a topical was posted on the brand's official Instagram handle, highlighting some of Rishi Kapoor's finest works. From Amar Akbar Anthony to Bobby and Mera Naam Joker, and Dafli Wale Dafli Baja, there is a representation of some of Risi Kapoor's most memorable characters in the film. Alia Bhatt, who is dating Rishi Kapoor's son Ranbir, also shared the aforementioned topical on her Instagram story and added a heart emoticon to it.The first caricature is an ode to Rishi Kapoor's character from the film 1977 film Amar Akbar Anthony, which also starred Amitabh Bachchan and Vinod Khanna. 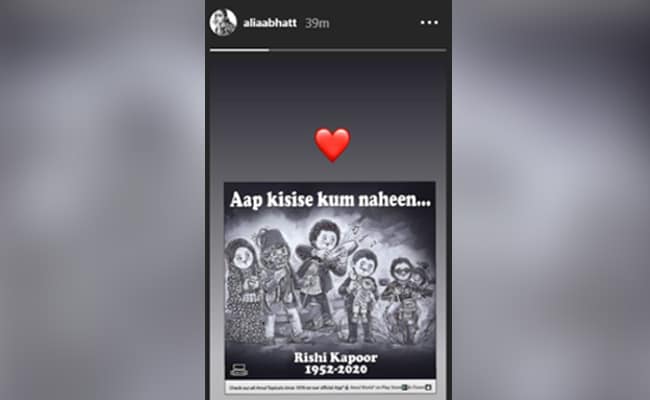 The little boy standing with a joker in his hand is reminiscent of Rishi Kapoor's debut film Mera Nam Joker, which starred his father Raj Kapoor. Rishi Kapoor played the younger version of Raju in the film. Mera Nam Joker tanked at the box office but acquired the status of a classic over the time.

The list of Rishi Kapoor's iconic tracks would require a different list altogether, but the song Dafli Wale Dafli Baja from the 1979 film Sargam , remains a favourite even today, and the caricature at the center is a depiction of the song.

The last character depicted in the topical happens to be from the 1973 film Bobby, which marked Dimple Kapdia's Bollywood debut. The film, which was way ahead of its time in a lot of spheres, had some evergreens songs and was a trendsetter on many levels.

Take a look at the tribute here:

#Amul Topical: He was a great and very popular star over many decades!

Rishi Kapoor died at the age of 67 at a Mumbai hospital on Thursday and his final rites were performed by his son Ranbir Kapoor at the Chandanwadi crematorium. The actor was meant to star in the Bollywood remake of The Intern, alongside Deepika Padukone. The original film starred Anne Hathaway and Robert De Niro.