Dafliwale To Om Shanti Om: 12 Classic Rishi Kapoor Songs As Evergreen As He

Here is a list of songs to remember Rishi Kapoor by. Let's go back in time with some of his classics. 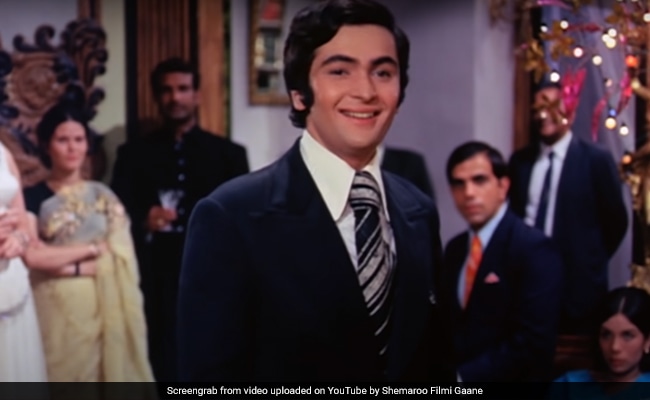 To some he was rockstar Monty; to others, he is the "dafiwala"; for the rest, he will be Akbar Ilahabadi forever. Rishi Kapoor, who died of cancer on Thursday at the age of 67, leaves behind a musical legacy as rich as his cinematic one; to pick from the many evergreen classics picturised on him is a difficult task but we've whittled an extremely long list down to our 12 favourite Rishi Kapoor numbers. From the poetic Main Shayar Toh Nahi to the groovy Om Shanti Om, here is a list of songs to remember Rishi Kapoor by. Let's go back in time with some of his classics.

The first name that is likely to pop up every time there is a mention of Rishi Kapoor's classics, the song Main Shayar Toh Nahi from the 1973 film Bobby, which also starred Dimple Kapadia. The song, which has been picturised on Rishi Kapoor and Aruna Irani, is poetic in every sense. Rishi Kapoor's boyish charm did perfect justice to Shailendra Singh's voice. We can't help but hum along every time we hear this song.

If there is one song that perfectly encapsulates the essence of Rishi Kapoor's personality, Khullam Khulla has to be it. The song that featured Rishi Kapoor with his reel and real life wife Neetu Kapoor, was sung by Asha Bhosle and Kishore Kumar and it resonates with today's generation.

The song Dafli Wale Dafli Baja from the 1979 film Sargam is as evergreen as Rishi Kapoor, who featured in the song along with Jaya Prada. Rishi Kapoor also starred in the recreated version of the original, when he was a part of Karan Johar's Student Of The Year as his charisma was intact.

Once upon a time, a heartthrob named Rishi Kapoor starred in the song Bachna Ae Haseenon from the 1977 musical drama Hum Kisise Kum Naheen and the rest is history. How can we forget it monochrome outfit, perfectly accessorised with a matching hat and a bright red belt? Years later, his son Ranbir Kapoor starred in an eponymous movie which featured a recreated version of the original song.

When Rishi and Neetu Kapoor's chemistry met Mohammad Rafi's music in an unforgettable qawwali from the 1977 film Amar Akbar Anthony, the results had to be phenomenal and Parda Hai Parda is just that.

If there's anyone who could have pulled off this song so perfectly, it has to be Rishi Kapoor. Sung by Kishore Kumar, this peppy track from Rishi Kapoor's Karzwas and will always be a favourite. We all almost gave our hearts away to Rishi Kapoor when he asks, "Kya tumne kabhi kisi ko dil diya?"

Another song from the 1980 film that absolutely deserves to be there on this list is the track Dard-e-Dil Dard-e-Jigar from the 1980 film Karz. Rishi Kapoor and Tina Munim's hush-hush romance in the video, powered with Rishi Kapoor's delightful expressions, was (is still) a sheer delight. Bonus - Mohammed Rafi's voice and Laxmikant Pyarelal's music. This morning when Karan Johar paid tribute to Rishi Kapoor, he mentioned how he would dance to the track as a kid.

Our favourite section of the song is the one that features Rishi Kapoor dancing alone. The track from the film Yeh Vaada Raha has been sung by Kishore Kumar and Asha Bhosla. Rishi Kapoor is seen romancing Poonam Dhillon in the quintessential Eighties fashion in the song.

This romantic song from the 1985 film Saagar, featuring the hit onscreen jodi of Rishi Kapoor and Dimple Kapadia, is in a way the epitome of Bollywood romance. Kishore Kumar's soulful voice, Javed Akhtar's lyrics and RD Burman's music make the song an unforgettable one.

Chandni O Meri Chandni just had to be there on this list.The amalgamation of Rishi Kapoor and Sridevi's chemistry and Yash Chopra's direction was sheer magic. The song was also a major trend setter in terms of fashion.

Rishi Kapoor's rich filmography and his iconic tracks will keep the actor's legacy alive. Forever. Tell us your favourite Rishi Kapoor songs and films in the comments.