"A piece of my growing years has been snatched away," wrote Karan Johar 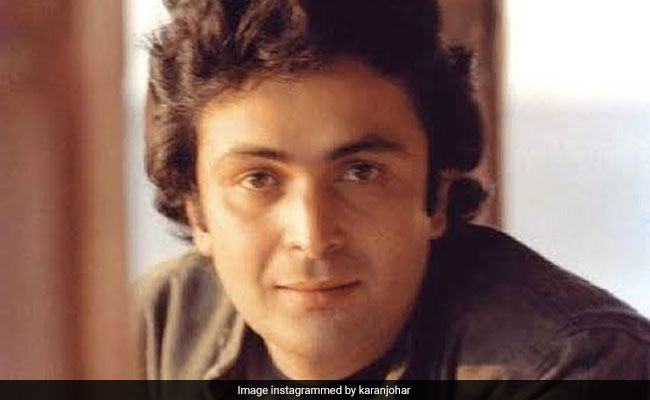 In a moving tribute to Rishi Kapoor, filmmaker Karan Johar recollects how he grew up watching the actor's films, wearing sweaters like Mr Kapoor did and dancing in his bedroom, playing the "dafli" on a plate at the dinner table and generally acting like a true fan. KJo was seven when he threw a tantrum about not being allowed to watch a Rishi Kapoor film on a school night, then almost passed out when he actually met Mr Kapoor on the set of his father Yash Johar's film Duniya; decades later, he shed a silent tear while directing Mr Kapoor in Student Of The Year. Rishi Kapoor died after a long battle with cancer on Thursday. He was 67. "A piece of my growing years has been snatched away," writes Karan Johar, "Dard-e-dil."

I was 7 years old and overheard that my parents were invited to see a preview of "Duniya meri Jeb mein"...it starred my favourite Rishi kapoor...it was school night and my very particular mother refused to let me come with her....I threw such a tantrum because i couldn't bear the fact that I was being disallowed from seeing a Chintu kapoor film...the parents finally succumbed...i went ....with stars in my eyes...like i had every time I saw him on celluloid...he was my HERO! The very handsome,the exceptionally charming,the eternally Romantic RISHI KAPOOR...my childhood was dedicated to watching him sing his songs with abandon, wearing his printed sweaters and dancing in my bedroom.....doing the dafliwalle routine with a dinner plate in front of my school friends...and finally nearly fainting when I met him for the first time in Cochin on the sets of my fathers film DUNIYA...I looked at him like he was a monument that I wanted to keep marvelling at....when i directed him in SOTY i shed a tear silently after he gave his first shot ... a major childhood dream was actualised ....today i feel like an irreplaceable void has crept into my existence...a piece of my growing years has been snatched away....i am honoured to love him...to know him...to have a drink and reminisce with him....I still will .. how can the romance of Indian Cinema ever leave us? Never. Dard -e dil....but this legendary legacy will live on! I LOVE YOU RISHI KAPOOR!

For those who don't know - if there are any who don't - Dard-E-Dil belongs to the soundtrack of one of Rishi Kapoor's best-known and best-loved films, 1980's reincarnation and revenge-themed Karz, co-starring Tina Munim.

Karan Johar's first reaction to Rishi Kapoor's death was this tweet - "He was my childhood." He didn't even need to name Mr Kapoor.

Rishi Kapoor, beloved star of films like Amar Akbar Anthony, Kabhi Kabhie, Chandni and, of course, Karz, was diagnosed with cancer nearly two years ago. He was treated in New York, where he spent just under a year, flying home to Mumbai last September. Mr Kapoor was last seen in 2019 film The Body and had signed up to star opposite Deepika Padukone in a Bollywood adaptation of the Anne Hathaway-Robert De Niro hit The Intern.

Rishi Kapoor is survived by wife Neetu, son Ranbir, daughter Riddhima and the vast Kapoor clan. "He would like to be remembered with a smile and not with tears," the family said in a statement released after his death.