"Thank you Sir for the warmth and for those incredible performances," wrote Anupama Chopra 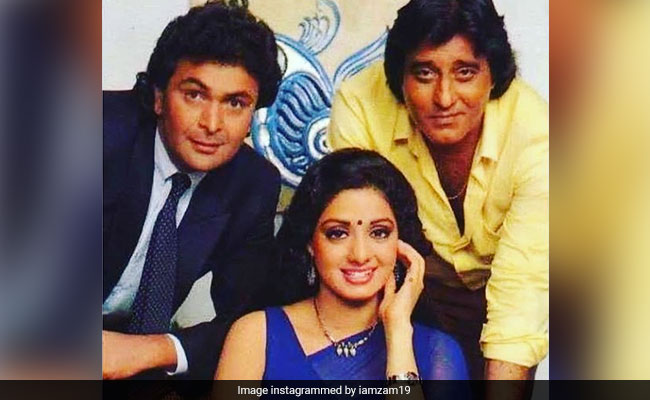 In the many grief-stricken tweets shared after actor Rishi Kapoor's death on Thursday, one particular film he starred in popped up often. Team Chandni is gone, social media rued, though far from forgotten. Rishi Kapoor, 67, died in a Mumbai hospital after two years battling cancer. Chandni (1989) is among the best-loved of his extensive filmography. Rishi Kapoor played one of the three lead characters in the Yash Chopra-directed film with Sridevi and Vinod Khanna. Mr Chopra died in 2012 of complications related to dengue; he was 80. Vinod Khanna died of cancer in 2017 in the same hospital as Rishi Kapoor - Sir HN Reliance Foundation. He was 70. Sridevi died suddenly and tragically the next year in Dubai where she was attending a family wedding. She drowned in the bathtub of her hotel room - Sridevi was just 54.

Chandni, co-written by film critic Anupama Chopra's mother Kamna Chandra, starred Sridevi as the title character, a young woman torn between two suitors - Rohit, played by Rishi Kapoor, gives Chandni up after becoming paralysed in an accident which his family blames on her; she turns to widower Lalit, played by Vinod Khanna, but her heart remains with Rohit. After much noble sacrificing on everyone's part, Chandni and Rohit end up together.

In a tweet posted after Rishi Kapoor's death, Anupama Chopra recalled that each time they met, Mr Kapoor told her how special Chandni and Prem Rog, also written by Kamna Chandra, were to him.

My mother Kamna Chandra wrote two #RishiKapoor films - Prem Rog & Chandni. Every time we met, he asked about her & told me, yet again, how special these roles were to him. It meant the world to her. Thank you Sir for the warmth & for those incredible performances. #RIP

I guess they are making Chandni up in heaven now! Heartbreaking RIP #RishiKapoorpic.twitter.com/VMUHGDiJNe

watching chandni again will never be the same pic.twitter.com/5dybqkCmUR

he joins his Chandni #RishiKapoor#riprishikapoorpic.twitter.com/uhlR2sB1pn

Rishi Kapoor spent the better part of the last two years in New York being treated for cancer. He returned to Mumbai last September, but his homecoming was only too brief. He died in on Thursday, day after his brother Randhir Kapoor confirmed to news agency PTI that he had been taken to hospital. Rishi Kapoor was cremated with family and very close friends attending his funeral in masks to comply with lockdown rules. A statement from the Kapoors said the actor remained "jovial" to the end and wanted to be remembered "with a smile and not with tears."