"A penchant for cracking up prevents you from breaking down. #FamilyMotto #crackpots," Twinkle Khanna wrote in the caption of the post 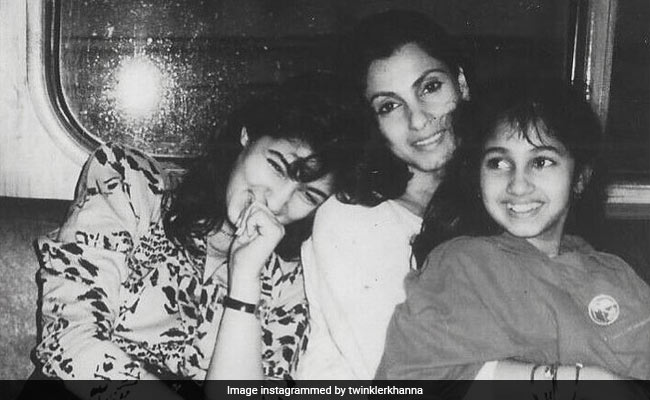 Actress turned author Twinkle Khanna, on Friday, took a trip down the memory lane and dug out an adorable throwback picture of herself with her mother, actress Dimple Kapadia, and sister, actress Rinke Khanna. The monochrome picture that Twinkle Khanna shared on Instagram features her laughing really hard as she leans on to Dimple Kapadia's shoulder who is seen sporting a bright smile on her face. Rinke Khanna, on the other hand, can be seen sitting in Dimple Kapadia's lap as she wears a beautiful smile on her face. The picture looks like from the time when Rinke was a teenager while Twinkle was in her youth days. Sharing the picture on Instagram, Twinkle wrote: "A penchant for cracking up prevents you from breaking down. #FamilyMotto #crackpots."

The 47-year-old actress turned author is known for her goofy Instagram posts besides her newspaper columns and blogs. She often shares pictures and videos of her well-kept garden. Twinkle Khanna recently shared her thoughts on the current times of the pandemic and the uncertainties surrounding it. She expressed herself through a poetic Instagram post on Wednesday. Sharing a short video of her garden, she wrote: "A series of todays. All the same. Leftover rainwater in a pothole. The future, a battered road that stretches as far as the eye can see. What else can we do to delight the heart except for float paper boats of the past across these stagnant puddles."

As summer is in its full bloom in the country right now, Twinkle Khanna recently gave us a glimpse of how summer looks like in her garden. She shared a picture of her daughter Nitara holding a raw mango from her garden. The 'Mrs Funnybones' author revisited her childhood as she wrote a caption describing how mangoes bring back memories for her.

Check out how summer looks like in Twinkle's garden

Twinkle Khanna enjoys a huge fan following of both movie buffs and bookworms. The comments section of her Instagram posts are always flooded with comments from her fans. Some of her fans have recently been inquiring about her husband, actor Akshay Kumar's health after he recently tested positive for coronavirus.

Akshay Kumar had in the beginning of this week announced on social media that he has been hospitalised as a precautionary measure. "Thank you, everyone, for all your warm wishes and prayers, they seem to be working. I am doing fine, but as a precautionary measure under medical advice, I have been hospitalised. I hope to be back home soon. Take care," Akshay Kumar wrote on Twitter.

Akshay and Twinkle have worked in several films together including Zulmi and International Khiladi. They got married in 2000 and later welcomed two children, son Aarav and daughter Nitara.