"He Was Guiding Me With Things Big And Small:" Sanjana Sanghi On Working With Sushant Singh Rajput

"To be doing this while dealing with personal loss is very challenging," Sanjana Sanghi said 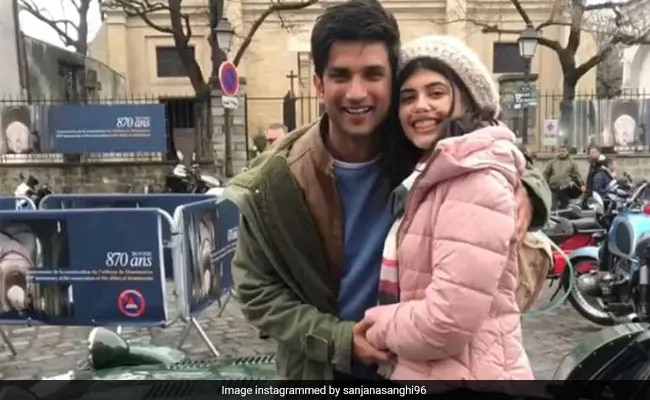 Actor Sanjana Sanghi, who is making her Bollywood debut as a leading lady opposite Sushant Singh Rajput in his final film Dil Bechara, says she is trying to be "courageous" as the team struggles to come to terms with the late star's absence. Sushant Singh Rajput was found dead at his Bandra home on June 14 at the age of 34. Billed as a soulful love story, Dil Bechara also marks the directorial debut of casting director and Sushant Singh Rajput's industry friend Mukesh Chhabra. Sanjana Sanghi, who played supporting roles in Rockstar, Hindi Medium and Fukrey Returns, said she is grateful for the outpouring of love for the characters of Kizie Basu and Immanuel Rajkumar Junior or Manny."

"I was supposed to do this (promote the movie) with Sushant from city to city. The pandemic wasn't supposed to be a reality and he was going to be by my side through this. But to be doing this while dealing with personal loss is very challenging," Sanjana Sanghi told PTI in an interview.

"Right now, I am trying to be courageous. I know he is looking over me. I am feeling an immense amount of gratitude. The love that we are receiving from people is giving both Mukesh and me a lot of strength. I am feeling an equal amount of numbness and gratitude," she added.

The 23-year-old actor said there was an "instant comfort and connection" with Sushant Singh Rajput on the sets as they found things in common, including love for dance and food. "It is a romantic film and involved us to be invested emotionally at a very deep level. We hit it off instantly when we met for readings. We connected on dance, food and academically."

"As an actor he was very helpful. He was an introvert but when he chose his people, he was very generous with them. He was guiding me with things big and small." Asked about the many stories about Sushant Singh Rajput's mental health in the media, Sanjana said the actor came off as a "committed artiste and a generous friend".

"I met Sushant on Dil Bechara and I didn't know him before so the person I met was the only Sushant I knew. These questions are coming out now. They are not from the experience he and I shared." The film produced by Fox Star Studios, released on Disney+Hotstar on Friday.