"Having Failed Michael Jackson Routine," Amitabh Bachchan Attempts Headbanging. How Did He Do? 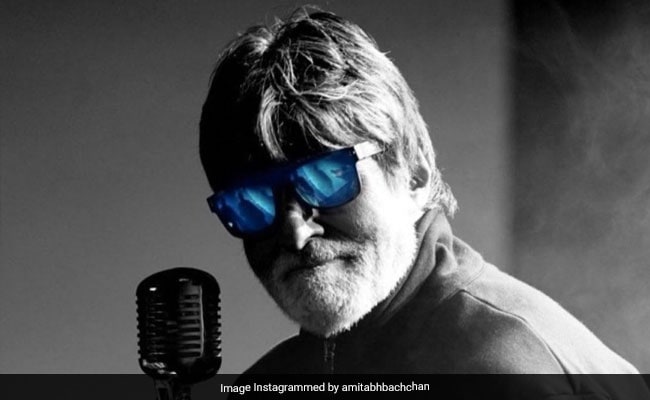 Bollywood veteran Amitabh Bachchan has aced the art of self-deprecating humour and his recent Instagram posts are proof. The 78-year-old actor, who earlier wrote about being a "failure" at replicating legend Michael Jackson, now joked about his head banging skills. The actor posted a picture of himself, in which he can be seen wearing a pair of tinted glasses as he stands next to a mic. Adding a humour-infused post, he wrote: "So having failed the MJ routine... They asked me to - in more recent times - attempt this, the Rock head banger. Same result. Nothing other than the shades rocked...Do approve please... They are the same that got posted the other day."

For those who missed the MJ post, we are here to help. Amitabh Bachchan began the week by posting a throwback picture from the sets of the 1988 film Gangaa Jamunaa Saraswathi, directed by Manmohan Desai. In the picture, Big B can be seen dressed in a moto jacket, matching pants with studs on it, a sequined shirt and matching gloves, trying to replicate MJ's iconic style. He captioned the post: "When Manmohan Desai thought that I could replicate MJ in our film Gangaa Jamunaa Saraswathi. What a failure I was."

In terms of work, Amitabh Bachchan was last seen in Shoojit Sircar's Gulabo Sitabo, co-starring Ayushmann Khurrana. The film released on Amazon Prime Video in June and it opened to largely positive reviews. The actor is also seen hosting the current season of the TV quiz show Kaun Banega Crorepati 12.

The actor's upcoming projects include Ayan Mukerji's Brahmastra, co-starring Alia Bhatt and Ranbir Kapoor, and Chehre, alongside Emraan Hashmi. He will also be seen in the sports drama Jhund. Last month, Big B signed a film called Mayday, which will be directed by Ajay Devgn and it will star Rakul Preet Singh.