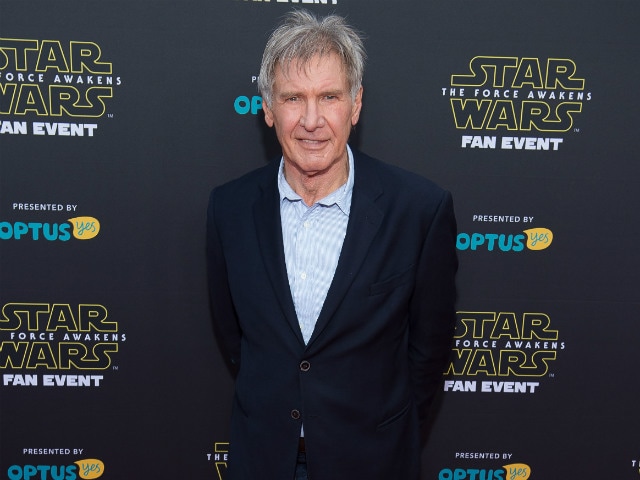 Washington: In person, Harrison Ford is slighter than you'd think, but in every other way exactly as you had imagined: He's gruff but not mean, serious but self-deprecating, a 73-year-old who looks 50. He's intimidating, but seems, unexpectedly, as though he would be fun at parties.

On a day to promote Star Wars: The Force Awakens, in which he returns as Han Solo, 32 years after retiring from the role that made him a superstar, Ford appears fully recovered from two recent accidents: He shattered an ankle when a hydraulic door closed on him in an on-set accident that temporarily shuttered production and later shattered the other ankle in a plane crash. (Also Read: Harrison Ford's Star Wars Character Now 'Emotionally More Complex')

Ford is the only actor who doesn't have a minder from the studio sitting in on his interview; he hates that kind of thing. He's friendly in the distracted way of famous people. He never breaks eye contact, answers the door himself, wonders whether you would like a cup of coffee - ordinary gestures that, he surely realizes, seem extraordinary when a movie star does them.

Ask him whether he exaggerates his grumpiness just to terrify people, and he seems appalled, but considers it: "No. I mean, I don't know what I am. I am what I am."

Q: So, who roped you into this?

A: George (Lucas). This was probably a year-and-a-half or two years ago. He said, "I'm thinking about (re-booting Star Wars)," and I said: "Maybe. I don't know. I'm not closed-minded about it. Is there a script? There will be? OK, let's talk when I get a chance to read it." Then J J (Abrams) comes along; he took the script and did his due diligence with it, and (screenwriter Lawrence Kasdan) became involved, and it was on the basis of all of them that I felt comfortable.

Q: Are you surprised to find yourself back here?

A: You never - what's the phrase? The nut doesn't fall far from the tree? It's funny, it's bizarre, it's a whole new world being here.

Q: Lawrence Kasdan said that once someone does something big like Star Wars, it's always with you. Do you agree? A: As a participant, you have a choice to reference that in your memory or be invested in something completely different and not think about that. I know when I think about my career, which I try not to do very often - that my career is based on the success of Star Wars and that gave me the opportunity to have the career that I have.

In the intervening years, you're watching TV and flipping through the channels and Star Wars comes on - I know how it ends. I'm not nostalgic. Star Wars

Q: But do you relate to it differently than if The Fugitive came on? Does it hit a different part of your brain, maybe?

Q: And do you keep flipping the channels?

A: Pretty much, yeah.

Q: So, you find yourself back here again. When does (being Han Solo) start to kick in for you? Not necessarily nostalgia, but is there a "sense memory" to it?

A: When I put on the clothes. There's a muscle memory that goes with those shoes, that goes with the fit of those pants. There's a swagger that's influenced by the gun on your hip. There's behavior that's influenced by turning around to say hi to your friend in the dog suit (Peter Mayhew, who returns as Chewbacca). It's a world, and you step into that world and you remember what it was like to live there.

Q: So filming starts, and you have your unfortunate accident. Were you constantly checking in to see how things were going (in your absence)?

Q: Did you feel bad?

Q: Should we assume that you're signed on (for sequels) in perpetuity?

A: Forever. No, you should assume nothing.

Q: You could die in the first five minutes.