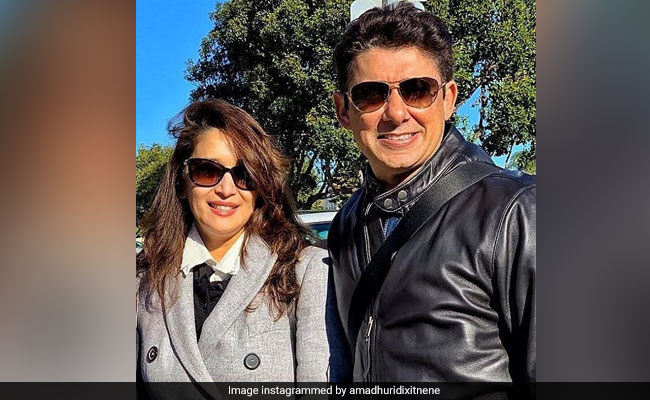 Madhuri Dixit's husband Dr Shriram Nene is celebrating his 53rd birthday today and the actress shared an adorable message for him on her Instagram timeline. In the picture, the 51-year-old actress can be seen standing next to her husband and she captioned the picture as: "Happy Birthday to my best friend and life partner Dr Shriram Nene. Your love encourages and inspires me every single day! May this year be the best one ever. Excited to share many more fun adventures and smiles with you this year and forever. Loads of love." Madhuri Dixit married Dr Shriram Madhav Nene in 1999 and the couple welcomed their first child Arin in 2003. Born in 2005, Raayan Nene is two years Arin's junior.

Happy Birthday to my best friend & life partner @drneneofficial Your love encourages and inspires me every single day! May this year be the best one ever. Excited to share many more fun adventures and smiles with you this year and forever. Loads of love

Dr Nene makes frequent appearances on Madhuri Dixit's Instagram timeline. Remember the actress' wedding anniversary post featuring herself with her husband? Or a picture of the family from their vacation in Spain.

Here are more photos of the couple:

Happy Sunday FacesIt's all about the quality of life and finding a happy balance between work and family!

Family and friendships are two of the greatest facilitators of happiness. Grateful that I found both in one person! #MomentsOfMine

It's gonna be a long flight for a year end family getaway! Can you guess where am I headed?

Madhuri Dixit, who made her Bollywood debut with Abodh, is best-known for her performances in films such as Beta, Hum Aapke Hain Koun..!, Dil To Pagal Hai and Devdas among others.