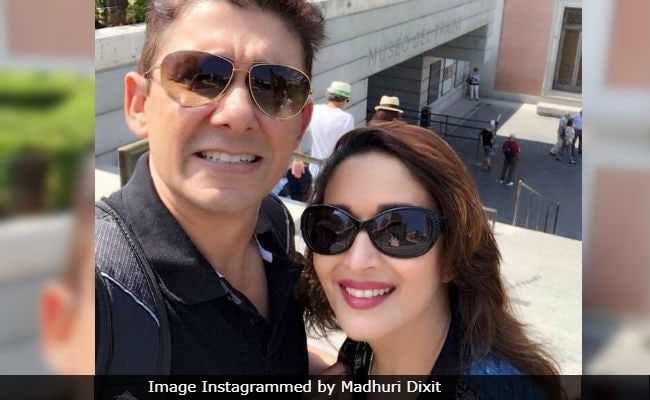 On their wedding anniversary, Madhuri Dixit wished her husband Dr Shriram Madhav Nene in the sweetest way possible. The actress shared an adorable picture and accompanied it with a dialogue from her 1997 film Dil Toh Pagal Hai. The 51-year-old actress wrote: "Kahin na kahin, koi na koi mere liye banaya gaya hai... and this became true when I met this man! Here's to spending a lifetime filled with love, fun and adventures with my most prized possession. Happy wedding anniversary, Ram. Love you!" Ms Dixit's post received over 1 lakh likes within an hour and it was replete with lots of warm wishes.

Dr Shriram Nene frequently makes an appearance on Madhuri Dixit's Instagram profile. Last month, Madhuri Dixit shared a picture of herself along with her husband and her younger son Raayan, from her Spain vacation, in which the trio could be seen riding a Segway.

Here are some of our favourite pictures of the couple:

On our way to Sonam's wedding reception...Congrats to the amazing bride and groom!!

Happy birthday to my darling soulmate.I feel so blessed to have you in my life. Here's to many more years of happiness, love and prosperity together

Madhuri Dixit stays with her family in Mumbai. She married Dr Nene in the year 1999 and the couple are parents to two sons- Arin and Raayan.

Madhuri Dixit is a renowned Bollywood actress, who has delivered many hit films especially in the Eighties and the Nineties. She is best-known for her performances in films such as Beta, Hum Aapke Hain Koun..!, Dil To Pagal Hai and Devdas among others. On the work front, she will next be seen in the comedy film Total Dhamaal, co-starring Anil Kapoor and Kalank, alongside Sanjay Dutt, Alia Bhatt and Varun Dhawan among others.