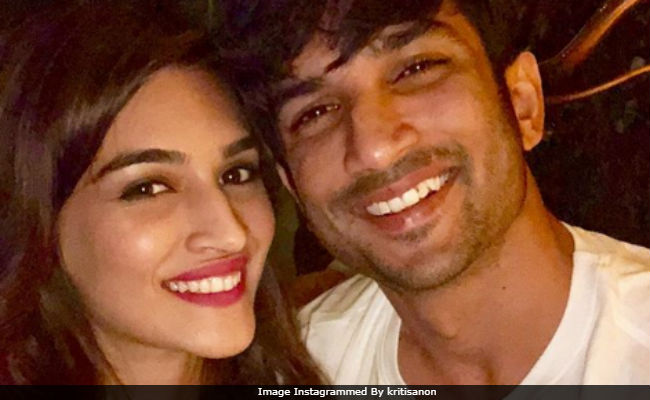 New Delhi: On Sushant Singh Rajput's birthday, Kriti Sanon posted an adorable wish for the actor. Sushant turns 32 today. (January 21). "Happy birthday @sushantsinghrajput! Keep that childlike smile always alive..! May you always stay as curious and excited as ever and may all that you wish for comes true!" wrote Kriti while posting a cute selfie of herself with Sushant. The actors featured together in last year's film Raabta and have been rumoured to be dating since they began filming. "You both look very cute" and "Looking beautiful together" are some of the several comments posted on Kriti's picture with Sushant, posted about an hour ago.

Happyyyy Birthday @sushantsinghrajput !! Keep that childlike smile always alive..! May you always stay as curious and excited as ever and may all that you wish for comes true!

Kriti earlier addressed the dating rumours with Sushant and told news agency PTI, "It happens every time you work with someone but I clarified what I had to online. Beyond that, I have nothing more to say. I really don't know what to say. It is the easiest thing to assume. I said what I wanted to. It reached a point where families started getting involved which was a little nasty."

Raabta was Kriti and Sushant's first film together. He revealed the secret behind their rapport and told IANS, "Kriti listens to everything happening in a scene intently and reacts to it and I try and do the same. This is the only reason I feel that most of the times the chemistry between us is appreciated. It was there even when we were auditioning together for the first time and didn't know each other."

Kriti and Sushant, along with some friends, celebrated New Year in Switzerland.

Promoted
Listen to the latest songs, only on JioSaavn.com
Sushant Singh Rajput's next films are - Kedarnath, along with Sara Ali Khan, Chanda Mama Door Ke, Drive and Sone Chidaiya.