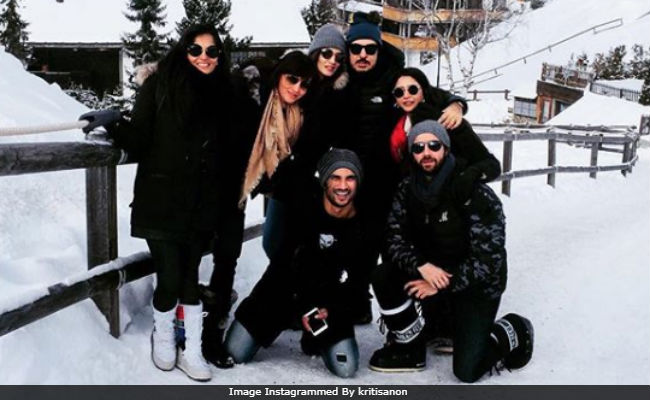 New Delhi: Rumoured couple Sushant Singh Rajput and Kriti Sanon are currently holidaying in snow-clad mountains of Alps and are accompanied by some friends. Both the actors, also co-stars of this year's June release Raabta, have shared multiple pictures from their Swiss vacation. Sushant's first post provided a glimpse of the view from his room and the second update, featuring Kriti and friends, playing in the snow, arrived a few hours later. "And as always, everyone ate too much to jump!!" Sushant described the picture as. Kriti's Instagram feed is also flooded with wonderful pictures from their holiday. (Sushant and Kriti's posts are giving us major travel goals and you would agree too).

In the end, winning is sleeping better.! #aroomwithaview

Promoted
Listen to the latest songs, only on JioSaavn.com
Sushant and Kriti have been rumoured to be dating since they began filming Raabta, but the duo have denied a romance. Kriti earlier addressed the dating rumours with Sushant and told news agency PTI, "It happens every time you work with someone but I clarified what I had to online. Beyond that, I have nothing more to say. I really don't know what to say. It is the easiest thing to assume. I said what I wanted to. It reached a point where families started getting involved which was a little nasty."

Sushant Singh Rajput is filming Kedarnath, along with Sara Ali Khan. She is the daughter of Saif Ali Khan and Amrita Singh. Kedarnath, directed by Abhishek Kapoor, is Sara's debut Hindi film. Meanwhile, he is also prepping for Chanda Mama Door Ke and Drive. Kriti Sanon was last seen in Bareilly Ki Barfi.