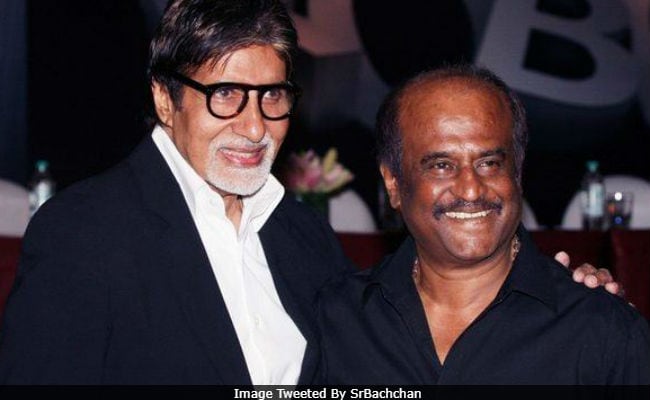 On superstar Rajinikanth's 68th birthday, his colleagues such as Amitabh Bachchan, Mohanlal, 2.0 co-star Akshay Kumar, director S Shankar and many others sent their best wishes to him. "Happy birthday, Rajinikanth... friend, colleague and a sensation ever," tweeted Amitabh Bachchan, adding multiple pictures with Rajinikanth to his post. The actors have co-starred in Hum and Rajinikanth also starred in the south remake of Big B's Don (released as Billa in Tamil). Rajinikanth responded in kind to Big B's birthday wish and wrote, "Respected Amitji, you are my inspiration. Thank you so much for your blessings." Akshay Kumar, who recently debuted in the Tamil film industry with 2.0, shared a picture with Rajinikanth from an event and wrote, "A dream co-star and a legend in every right! You are an epitome of simplicity and it was an absolute honour to work with you."

Respected Amitji , you are my inspiration. Thank you so much for your blessings https://t.co/mh2KNz7IzJ

A dream co-star and a legend in every right! You are an epitome of simplicity and it was an absolute honour to work with you. #HappyBirthdaySuperstar @rajinikanth :)

S Shankar, who has directed Rajinikanth in blockbusters films like Sivaji, Enthiran and now 2.0, tweeted a photo of the megastar as Chitti the robot from 2.0 and wished him on behalf of their entire team. "Happy birthday super one," read the text.

Thank you so much dearest Shanker sir https://t.co/FFdt2of4YX

Rajinikanth's 2.0 hit the screens last week. The Hindi version has so far earned Rs 164 crore and is now the fourth-highest earning film of 2018. In 2.0, Akshay Kumar plays the prime antagonist Dr Richard. It is the sequel to Enthiran (Robot in Hindi).

For 2.0's success, Rajinikanth thanked his fans and the team at a recent event. "I need to thank audiences across the globe for the success of 2.0. The entire credit for the victory goes to director Shankar, producer Subaskaran of Lyca Productions and the technicians," news agency IANS quoted him as saying.

Petta is Rajinikanth's next film.