The actress is ringing in her 39th birthday in London 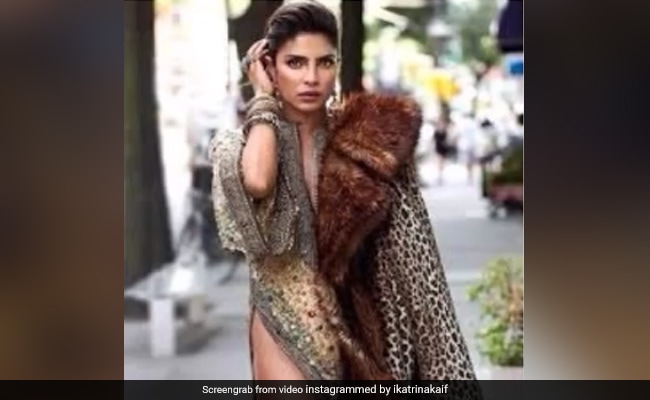 Priyanka Chopra turns 39 today, and she's celebrating her special day along with friends and family in London. The actress received global recognition for her show Quantico where she played the lead character of an FBI agent, Alex Parrish. Since then, Priyanka has added several achievements to her multi-faceted cap, such as opening her own Indian cuisine-themed restaurant Sona in New York City and starting her own line of hair care products, Anomaly. On her birthday, many of her industry friends and colleagues posted wishes from her on their Instagram timelines. 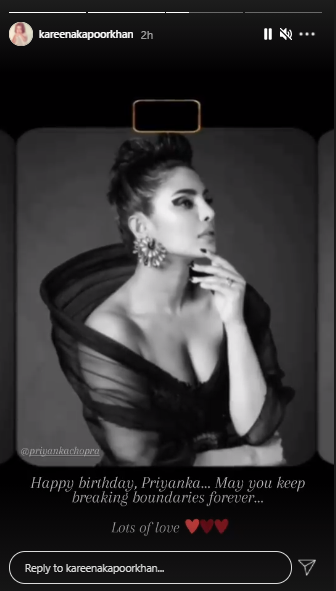 Katrina Kaif penned a heartfelt message reminiscing their initial career days together. The actress posted a stunning picture of the birthday girl and captioned it, “From our days at guruji. How I used to dread dancing after you. Your fire and drive has always inspired me at various points in my life, some important car rides and nights out. Every time we meet it's always a blast. Keep riding higher and higher, may you always be blessed. Happy Birthday.” 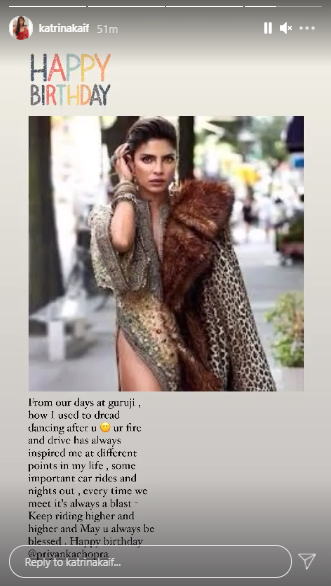 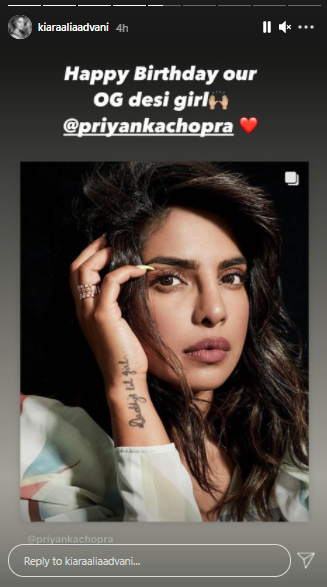 Jacqueline Fernandez posted a picture of Priyanka and herself from one of her fan pages on her Instagram Stories to wish the birthday girl. 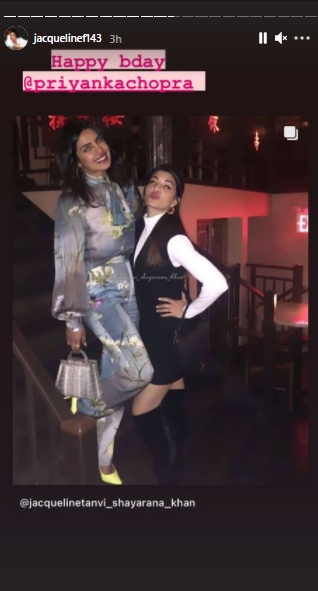 Anushka Sharma posted a radiant picture of Priyanka dressed in a sunshine yellow dress along with a sweet message that read, “Here's to a blessed life filled with lots of happiness and love.” 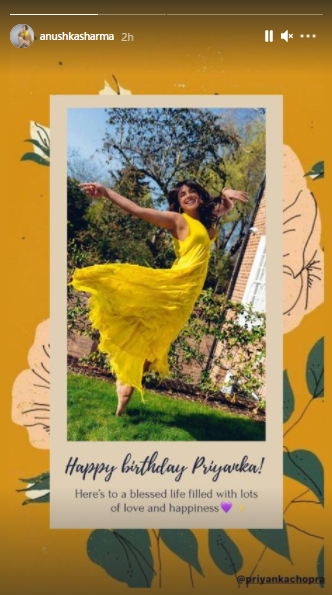 Actress Madhuri Dixit-Nene posted a picture of Priyanka and herself showing off some dance moves on her Instagram Stories. She captioned the post,” Happy Birthday, dear Priyanka. Makes me proud to see you grow from strength to strength. Wishing you luck in all your future endeavours. Lots of love”, along with a heart emoji. 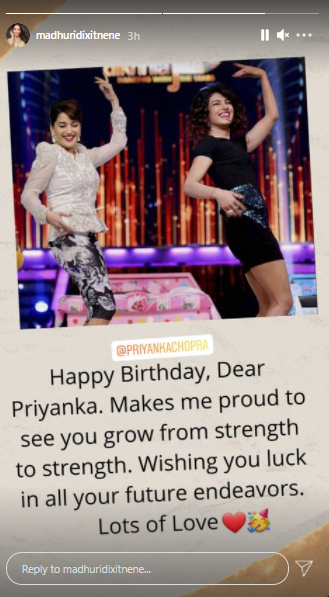 Dia Mirza posted a cute “Happy birthday PeeCee.” along with a tiger emoji. PeeCee is what many people refer to Priyanka as in the industry. 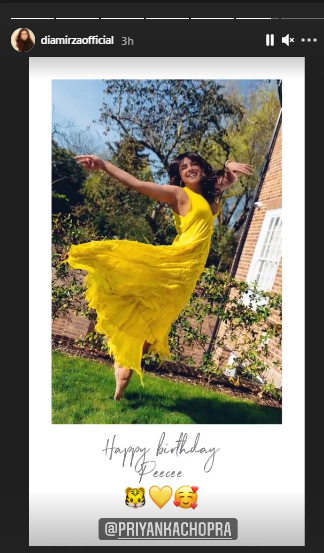 Janhvi Kapoor, too, posted a special note for Priyanka. In it, she said, “Happy birthday to everyone's favourite desi girl!! Wishing you another year of being a complete boss and making it seem so effortless and fun!” 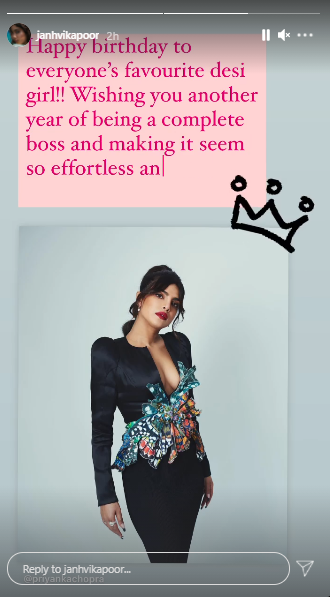 Designer Masaba Gupta, who has for long admitted to being a fan of Priyanka Chopra, posted a picture of the actress in a black body-hugging dress, and captioned it, “Happy birthday Priyanka Chopra. Admire you, salute you and so inspired by you.” 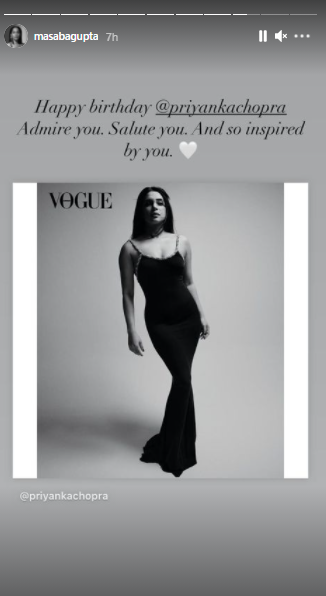 Sophie Choudry posted a throwback picture with Priyanka and wrote, “ Happy birthday to the most inspiring, hard-working, super cool woman. You are the ultimate game-changer.” 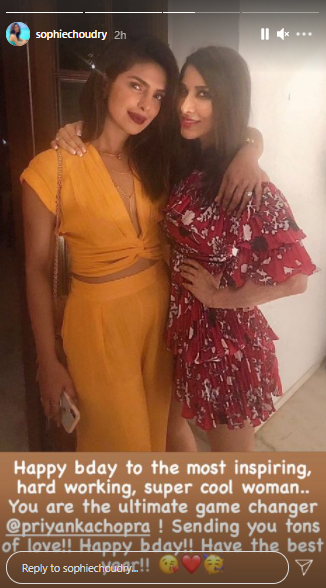 Priyanka made her debut in the Tamil film Thamizhan opposite Vijay in 2002, after she won the Miss World pageant in 2000. She made her Bollywood debut in 2003 with the film The Hero: Love Story of a Spy. She rose to become one of the leading actresses of the country with her work in movies such as Kaminey, 7 Khoon Maaf, Barfi!, Mary Kom, Dil Dhadakne Do and Bajirao Mastani. She made her Hollywood debut with the television show Quantico, and followed it up with roles in Baywatch, Isn't It Romantic and A Kid Like Jake. She was last seen in the film The White Tiger.