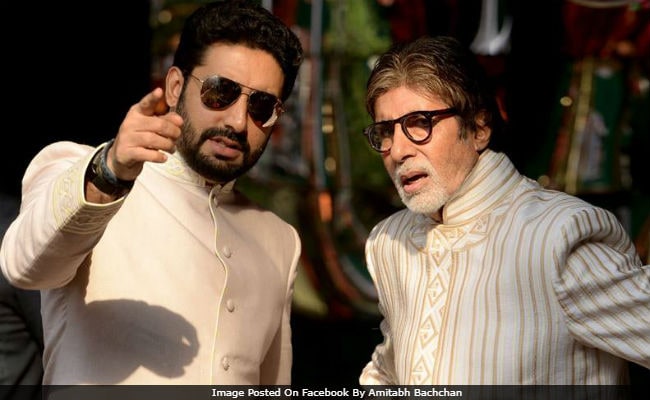 New Delhi: Superstar Amitabh Bachchan posted a heartfelt birthday message for son Abhishek, who turns 42 today (February 5). Abhishek is currently in Australia with wife Aishwarya Rai Bachchan and their daughter Aaradhya. "#HBDAbhishekBachchan .. who is in a time zone out of the country .. !! Ek Samay tha pita putra ka haath thaam ke chalta tha, ab putra haath thaam ke chalata hai pita ko," Big tweeted, along with some pictures of his son. Abhishek is Amitabh Bachchan and wife Jaya Bachchan's second child. His elder sister Shweta is married to industrialist Nikhil Nanda. Abhishek married actress Aishwarya Rai over a decade ago and Aaradhya, their only child, was born in 2011.

"And it just turned the 5th of February here in Mumbai, India.. and it had turned the 5th 5.30 hrs ago where Abhishek, the birthday boy is - Australia !! Wishes were exchanged and greetings and blessings were given.. the distance not withstanding," Big B wrote on his blog. Abhishek, Aishwarya and Aaradhya flew out of Mumbai last Friday. However, the destination wasn't revealed by any member of the Bachchan family then. Abhishek later shared a couple of pictures from Sydney.

G'day from down under. #sydneyoperahouse

"Abhishek .. the enunciation process and prayer to the God's .. even now has that same wonder and questioning nature .. is a lot more quieter than his younger sitting on Father's lap days .. and taller .. but still the nature similarity! May the blessings of a Father be his most desired .. for fulfilment and prosperity .. in a world that brings forth a challenge a minute," Amitabh Bachchan, 75, added.

Promoted
Listen to the latest songs, only on JioSaavn.com
Abhishek Bachchan debuted in 2000 with J P Dutta's Refugee. He is the star of films such as Yuva, Bunty Aur Babli, Dhoom, Sarkar, Dostana, Bol Bachchan and Happy New Year. 2016's Housefull 3 was his last film. Anurag Kashyap's Manmarziyan is his next film. He also co-owns an Indian Super League football club Chennaiyin FC.