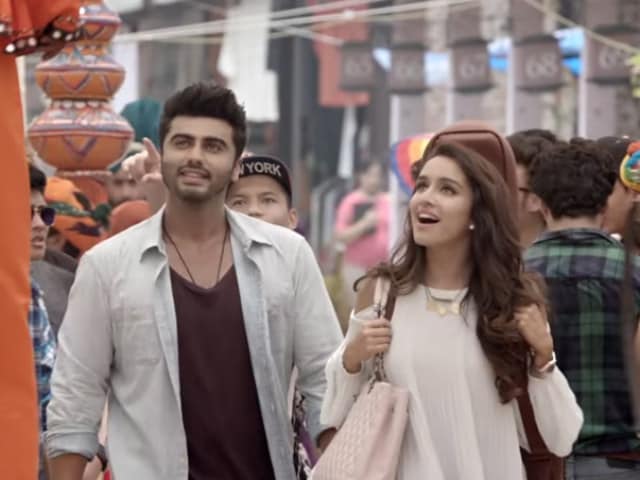 Half Girlfriend Trailer: A still from the trailer

New Delhi: "Yeh Half Girlfriend hota kya hai?" The trailer of Arjun Kapoor and Shraddha Kapoor's new film Half Girlfriend has arrived to answer your query. Half Girlfriend stars Arjun as Madhav Jha, who hails from Patna, while Shraddha plays a Delhi-based college student, Riya Somani. Madhav and Riya share a common factor - their love for basketball. Riya is the top basketball player of her college while Arjun, a basketball enthusiast, can always be spotted cheering in the stands. They meet somewhere around the basketball court and their story takes off. "Presenting the first peek into Madhav and Riya's story," wrote Arjun when he shared the trailer on Twitter.

The first half of the trailer dedicates itself to show how Riya and Madhav come close and become more than friends. However, Riya points out that her relationship with Madhav can be best described as a half a girlfriend. "Main tumhari girlfriend nahi hoon. But I can be your half girlfriend?" Riya says in the trailer. Madhav agrees only to disagree later. Previously, the posters of the film attempted to explain the term 'Half Girlfriend' as "dost se zyada and girlfriend se kam."

Riya and Madhav separate on a bitter note, following which Riya shifts base to New York. Meanwhile, a realisation dawns upon Madhav and he begins his venture to win Riya back in his life. Despite warnings from his family and friends, Madhav continues to remain haunted by the thought of losing Riya forever.

Promoted
Listen to the latest songs, only on JioSaavn.com
Watch the trailer of Shraddha Kapoor and Arjun Kapoor's Half Girlfriend here:


The Mohit Suri-directed movie is actually Chetan Bhagat's fourth novel that has been made into a film. Half Girlfriend has been shot in Delhi, Patna and New York and is scheduled for May 19. Shraddha Kapoor, 30, and Arjun Kapoor, 31 co-star for the first time in Half Girlfriend.