"Gunda Of The Film" Shah Rukh Khan Felt Like Thanking Chak De! India Team And So He Did 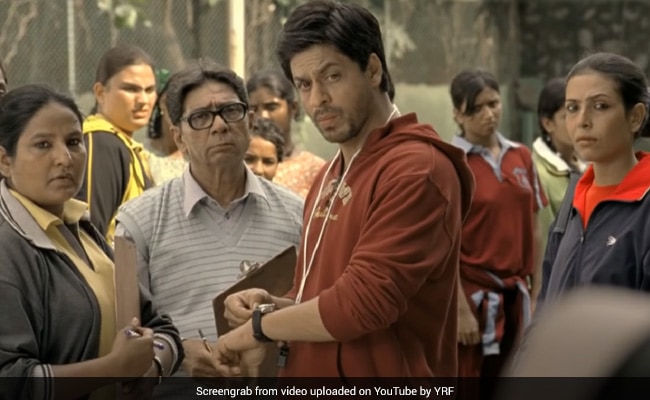 Shah Rukh Khan in a still from the film. (courtesy YouTube )

Shah Rukh Khan doesn't need an occasion to look back at his film Chak De! India and so he shared a post thanking the "young ladies" and the team of the 2007 sports film. Shah Rukh Khan posted a selfie and referred to himself as the "gunda of the film" because as you know, coach Kabir Khan said in the film, "Har team mein sirf ek hi gunda ho saktha hai, aur is team ka gunda main hoon." Chak De! India clocked 14 years on August 10 this year. Yes, it has been that long. Coming back to SRK's post, he wrote: "Just felt like thanking all the young ladies of Chak De! India for making the film such a beautiful experience." In his post, Shah Rukh Khan also thanked the film's director Shimit Amin, producer Aditya Chopra, screenwriter Jaideep Sahni, former hockey player Mir Ranjan Negi, cinematographer Sudeep Chatterjee and singer Sukhwinder Singh, who sang the title track. He thanked everyone "involved with this labour of love for making me the 'Gunda' of the film." Ranveer Singh dropped a crown emoji in the comments.

Directed by Shimit Amin, Chak De! India won the National Award for Best Popular Film Providing Wholesome Entertainment. It is considered to be one of the most iconic sports films of Bollywood. The film was a box office success and was equally adept at impressing the critics.