Guess Who Banita Sandhu Can't Stop Staring At In These Pics? 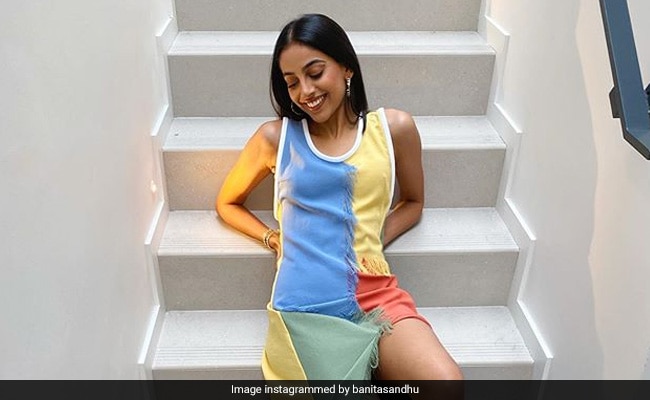 Banita Sandhu, best known for her role in Shoojit Sircar's movie October, shared fun-filled glimpses of a photoshoot she was part of recently. Banita Sandhu, who lives in London, shared a bunch of BTS photos, sequencing them in an ROFL manner, which explains her caption. "Can't stop stairing at you," Banita captioned her photos, in which she can be seen admiring her furry friend - a kitty. In the comments section, Banita clarified that she deliberately wrote "stairing" because: "I was trying to be punny." Banita's photoshoot location was on a flight of chalk white stairs. For the photoshoot, Banita Sandhu dressed up in a colour-blocked ensemble from the studios of Loewe and accessorized with statement pieces from Aqwaa.

Banita Sandhu, on her Instagram stories earlier, revealed she had the coronavirus and that she has returned to work commitments after recovery. Last month, Banita Sandhu was spotted holidaying in Spain, from where she shared stunning glimpses of her vacation diaries:

wish you were here

thought this deserved longer than 24hr on the gram

Banita Sandhu was introduced in Bollywood when Shoojit Sircar's October released in 2018. In the movie, Banita Sandhu co-starred with Varun Dhawan. Next year, Banita made her debut in Tamil cinema with Adithya Varma. Banita Sandhu has also featured in American sc-fi series Pandora and has starred in the English film Eternal Beauty. Banita has collaborated with Shoojit Sircar again for the upcoming movie Udham Singh, which casts Vicky Kaushal in the titular role.