Don't miss out on V and Olivia Rodrigo's crackling chemistry 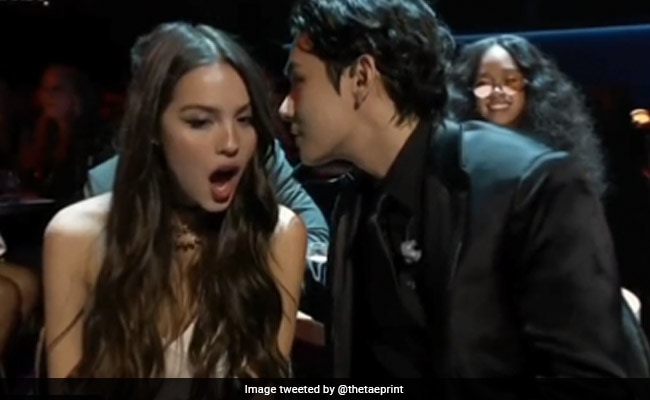 The BTS ARMY, as Korean boy band BTS' fans are called, are at the moment processing the 64th Grammy Awards where BTS member V had a moment with singer Olivia Rodrigo which was captured on camera. The Grammys featured a blockbuster list of live performances and none was more thrilling than BTS who sang their hit song Butter. The seven members who make up BTS each had a unique entry into the events of the Grammys - however, fans have no mind space for anything other than V (real name Kim Taehyung) whispering into Olivia Rodrigo's ears before making his way onto the stage.

Ahead of BTS' performance, V was seen sitting next to Olivia in the audience. As the camera panned at V, he whispered in her ear, making her gasp. He then pointed at the stage and flicked a card away. A more Internet-breaking encounter cannot be imagined.

Here have a look at the viral video:

Reacting to the viral video of V and Olivia, a user tweeted, "Crying of jealousy OMG KIM TAEHYUNG," followed by another user, "This can't be happening nooooo"

Another fan wrote, "I was blushing for her omg".

I was blushing for her omg

"Lets not pretend any of us had a chance."

lets not pretend any of us had a chance pic.twitter.com/ixHMUBy7Y9

Here check out all the reactions:

Dressed in all black, BTS's RM, Jin, Suga, J-Hope, Park Jimin, V and Jungkook performed their hit track Butter at the Grammys 2022 and were given a standing ovation. They looked like secret agents with neon-blue lasers, and as usual, their choreography was top notch.

BTS were nominated for Best Pop Duo/Group Performance for Butter, which they lost to Doja Cat and SZA for Kiss Me More. It was BTS's second nomination - their song Dynamite was up for the same category at last year's Grammys. Olivia Rodrigo did won this year; in fact, she won three Grammys - Best Pop Solo for Driver's License, Best Pop Vocal Album and Best new Artist.