Grammys 2020: The Jonas Brothers have been nominated in the Best pop duo/group performance category for their comeback single Sucker 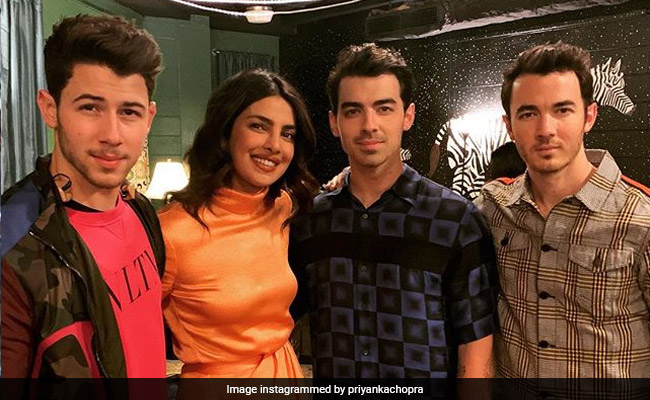 The Jonas Brothers are Grammy-nominated! And needless to say that Priyanka Chopra, who is married to Nick Jonas, celebrated the big news with a massive shout out to the Jo-Bros in a tweet. "So proud of you, Jonas Brothers! I love you Nick Jonas, Joe Jonas, Kevin Jonas," tweeted the 37-year-old actress along with a montage of the Jonas Brothers from their studio. The Jonas Brothers have been nominated in the Best pop duo/group performance category for their comeback single Sucker for the Grammys 2020. The Grammy-nominated song also features Priyanka. The pop band will compete in the category with the likes of Ariana Grande and Social House (nominated for Boyfriend), Post Malone and Swae Lee (Sunflower), Shawn Mendes and Camila Cabello (Senorita) and Lil Nas X (Old Town Road).

Meanwhile, the Jonas Brothers are obviously overwhelmed. "We're Grammy nominated!" wrote Nick Jonas while Joe added: "10 years later we are nominated again for a Grammy," along with a video. Kevin Jonas added: "Thank you everyone for making this year possible! From no music a year ago to Grammy nomination today! Incredible!" See their tweets here:

10 years later we are nominated again for a Grammy thank you! pic.twitter.com/LE7gsEiLZ0

Thank you everyone for making this year possible!! From no music a year ago to @RecordingAcad#grammy nomination today! Incredible!!!! pic.twitter.com/Gn7QFVVe2B

The Jonas Brothers dismantled their band in 2013 but broken hearts were mended when they announced they reunited this year. Their comeback single Sucker from the album Happiness Begins debuted on Billboard's List of Top 100 and also featured Sophie Turner (Joe's wife) and Danielle (Kevin's wife) alongside Priyanka.

Meanwhile at the nominations, pop sensation Lizzo scored the highest number of nods with nominations. Close behind Lizzo are teen pop star Billie Eilish and rapper Lil Nas X, who received six nods each. Grammys 2020 will be held on January 26, which is morning of January 27 in India.