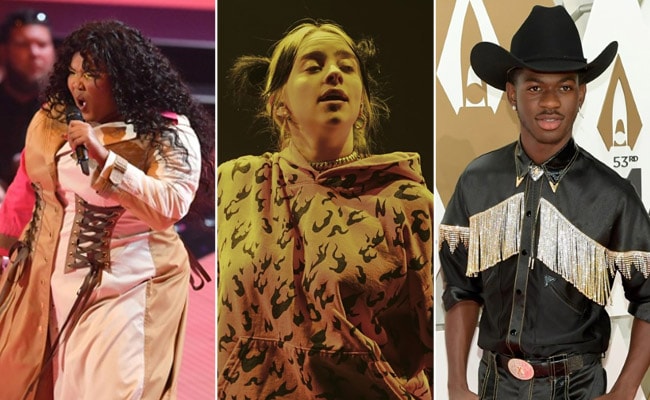 As expected, Grammy Awards nominations day was a triumphant one for Lizzo. The breakout pop phenom earned eight nods - the most of any artist - including for album of the year for Cuz I Love You, best new artist, and song and record of the year for the inescapable Truth Hurts.

Close behind were teen pop star Billie Eilish and rapper Lil Nas X, who earned six nominations each. Lil Nas X's groundbreaking monster hit Old Town Road was locked on the top of the Billboard Hot 100 chart for a record breaking 19 weeks this year - until it was knocked off by Eilish's smash Bad Guy, which also landed in the song and record of the year categories.

Album of the year, the show's most prestigious honor, included all three most-nominated artists, along with Lana Del Ray, H.E.R., Bon Iver, Vampire Weekend and Ariana Grande, who made headlines last year when she skipped the Grammys after a disagreement with producers over which songs to perform on the broadcast.

The upcoming Grammy Awards marks the inaugural ceremony under the leadership of Deborah Dugan, the first female president in the history of the Recording Academy. In August, she took the reins from Neil Portnow, who ran the organization for 17 years; in his final year, he sparked controversy by suggesting that women needed to "step up" to win more awards after only one solo female artist was given a trophy during the 2018 Grammys telecast.

- Album of the year

When We All Fall Asleep, Where Do We Go?, Billie Eilish

Thank U, Next, Ariana Grande

Cuz I Love You, Lizzo

Father of the Bride, Vampire Weekend

- Record of the year

- Song of the year

Tank and the Bangas

The Lion King: The Gift, Beyonce

When We All Fall Asleep, Where Do We Go?, Billie Eilish

Thank U, Next, Ariana Grande

You Need to Calm Down, Taylor Swift

Revenge of the Dreamers III, Dreamville

Amo, Bring Me the Horizon

In The End, the Cranberries

Look at Me Now, Emily King

Father of the Bride, Vampire Weekend

It All Comes Out in the Wash, Miranda Lambert

Some Of It, Eric Church

Ride Me Back Home, Willie Nelson

I Don't Remember Me (Before You), Brothers Osborne

Stronger Than the Truth, Reba McEntire

We've Got to Try, the Chemical Brothers