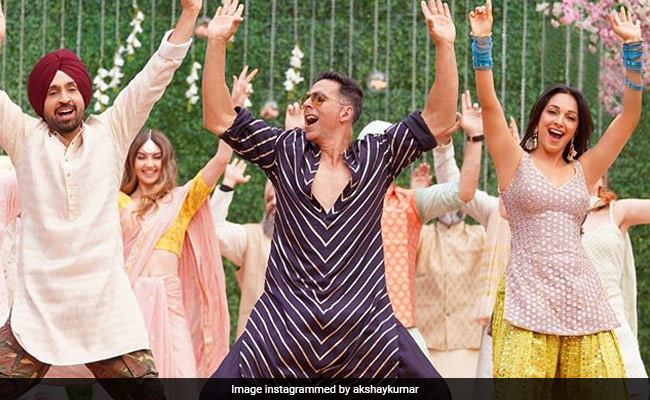 Remember the dance number Sauda Khara Khara by Sukhbir? Team Good Newwz have given a fun twist to the Nineties' song and included it in the film's playlist. Akshay Kumar, Diljit Dosanjh and Kiara Advani (the film also stars Kareena Kapoor) dropped the peppy number on Tuesday to drive away our mid-week blues. The remix version of Sauda Khara Khara has also been sung by Sukhbir along with actor-singer Diljit Dosanjh and Dhvani Bhanushali. Sauda Khara Khara is the second song to be released from Good Newwz and has been best described by Akshay Kumar as an "epic shaadi song" on Instagram. On Twitter, he shared the Good Newwz track with these words: "Throw your hands up and join in."

The song begins with Kiara Advani, dressed in kurta-salwaar and a pair of sneakers, bringing in the baraat to a wedding with killer bhangra steps. Diljit Dosanjh, who plays her husband in the film, also in sneakers (known for his bhangra skills), joins her on the dance floor. As the Kiara-Diljit duo set the mood just right for a big fat Punjabi wedding, Akshay Kumar pumps up the beat with his surprise entry. Akshay, also in sneakers, matches Kiara and Diljit's bhangra steps on the stage before breaking into an impromptu naagin dance. Akshay Kumar is such an entertainer, we tell you.

Good Newwz is a comedy spun around the idea of surrogacy, in which Akshay and Kareena feature as a couple who are trying to have their first baby while Kiara and Diljit have been cast as a younger couple. Directed by Raj Mehta, Good Newwz will hit screens on December 27.