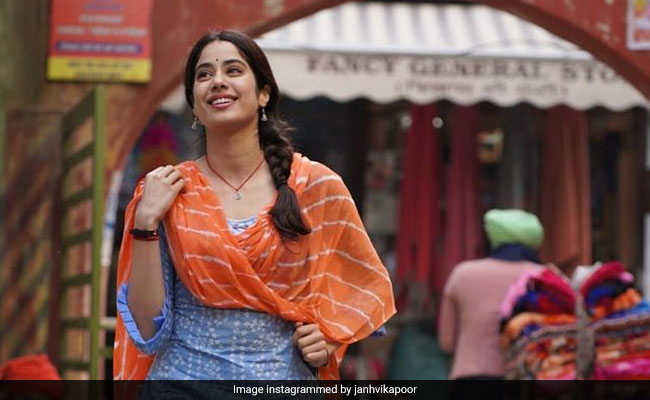 Actress Janhvi Kapoor will feature in a new film titled Good Luck Jerry, a glimpse of which she shared on Instagram on Monday. Janhvi's Instagram post is sort of a first look at her character from Good Luck Jerry. She appears to be a happy-go-lucky soul, who can be seen smiling ear-to-ear in the photo - Janhvi sports a salwar kameez with her hair styled in braids. She simply captioned the photo with the film's name as a hashtag and a smiley. Aanand L Rai, whose Colour Yellow Productions is backing the movie, gave a massive shout out to the 23-year-old actress on his Twitter feed, marking today as the first day of Good Luck Jerry's shoot. The first schedule of the film is expected to continue till March, reported news agency PTI.

Colour Yellow welcomes 2021 with #GoodLuckJerry starring #JanhviKapoor !
The shooting of our new film has begun today!
Directed by: #SiddharthSengupta
Written by: #PankajMatta@LycaProductions@sundialent#DeepakDobriyal@sushant_says#MitaVashisht#Neerajsood@sonamsharmaa_pic.twitter.com/aRmDOIG5sm

Janhvi Kapoor was last seen in Netflix release Gunjan Saxena: The Kargil Girl and was critically applauded for her performance. Janhvi Kapoor's upcoming list of films include Roohi Afzana, in which she co-stars with Rajkummar Rao, and also Dostana 2, co-starring Kartik Aaryan.