Just A Viral Pic Of Kartik Aaryan And Janhvi Kapoor, Twinning In White, From Goa

The duo took off to Goa a couple of days ago 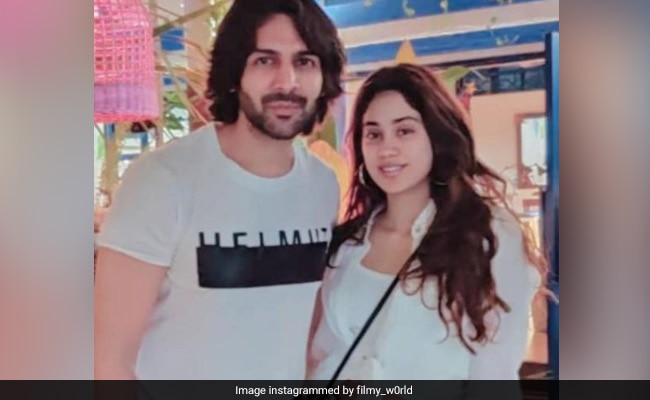 Kartik Aaryan and Janhvi Kapoor are currently chilling like villains in Goa and a photo of the stars from their trip is doing the rounds on the Internet. Kartik and Janhvi will co-star in Dostana 2. The duo took off to Goa a couple of days ago but it is still not clear whether they flew out of Mumbai for their film shoot or just for a vacation. In the now-viral photo, Kartik Aaryan and Janhvi Kapoor can be seen twinning in white outfits - he looks super cool in a white t-shirt while the actress can be seen wearing a white crop top and checkered pants. The photo has been shared by several fan clubs and is now trending on social media. Take a look now:

Janhvi Kapoor made her debut in the film industry in 2018 with Dhadak, in which she co-starred with Ishaan Khatter. She went on to feature in Netflix's Ghost Stories (in the Zoya Akhtar-directed segment). Janhvi Kapoor, who was last seen in Dharma Productions' Gunjan Saxena: The Kargil Girl, has a couple of films lined up, including Takht, in which she will share screen space with Alia Bhatt, Kareena Kapoor, Ranveer Singh, Anil Kapoor, Bhumi Pednekar and Vicky Kaushal and Dostana 2.

Kartik Aaryan was last seen in Imtiaz Ali's Love Aaj Kal. Other than Dostana 2, the actor will also feature in Bhool Bhulaiyaa 2.