The team of Dostana 2 will resume filming in Delhi once the air condition improves. 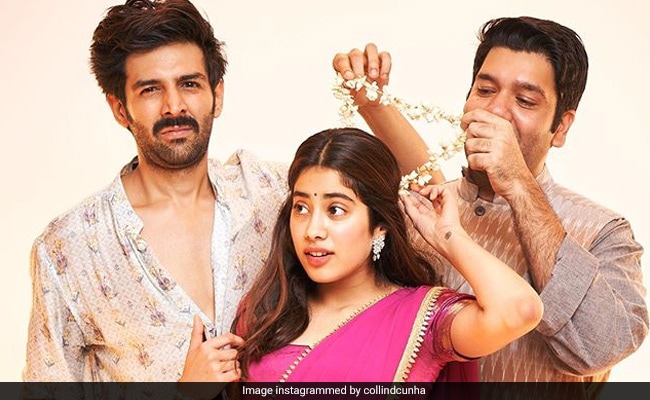 Janhvi Kapoor and Kartik Aaryan's upcoming film Dostana 2, which went on floors shortly after Diwali, hit a roadblock of sorts after the shooting location changed from Chandigarh to New Delhi. As per a Bollywood Hungama report, the abysmal pollution level in Delhi is the primary reason for cancelling the film's shoot. A source told Bollywood Hungama that the crew left Delhi as they were unable to shoot due to low visibility and after some members complained about breathing issues. "The cast and crew couldn't breathe. Visibility was so low that the camera couldn't capture the shots properly. It was a no-win situation. The team decided to disperse until the weather improves," a source was quoted as saying.

The alarming rise in pollution level in Delhi has been a cause of concern for the locals and the government for the past couple of weeks. The Air Quality Index recorded on Monday (November 11) remained over 300 (classified as 'very poor') in several parts of the city. Earlier this month, schools in Delhi remained shut due to the rise in pollution level and the Arvind Kejriwal-government re-implemented the 'odd even' traffic rationing scheme.

Earlier, actress Priyanka Chopra posted about the poor air quality in New Delhi - when she arrived here to shoot Netflix film The White Tiger. She posted a picture of herself wearing a face mask and wrote, "Shoot days for The White Tiger. It's so hard to shoot here right now that I can't even imagine what it must be like to live here under these conditions. We are blessed with air purifiers and masks. Pray for the homeless. Be safe everyone."

Shoot days for #thewhitetiger. It's so hard to shoot here right now that I can't even imagine what it must be like to live here under these conditions. We r blessed with air purifiers and masks. Pray for the homeless. Be safe everyone. #airpollution #delhipollution#weneedsolutions #righttobreathe

Back to Dostana 2 - Before Delhi, Kartik and Janhvi started filming in Chandigarh. Janhvi Kapoor and Dostana 2 director Collin D'Cunha also visited the Golden Temple in Amritsar before they began filming. Here are glimpses from the Dostana 2 diaries so far.