Gauri Khan Shares A Pic With Shah Rukh Khan, Clicked In "2000 Something" (Her Words) 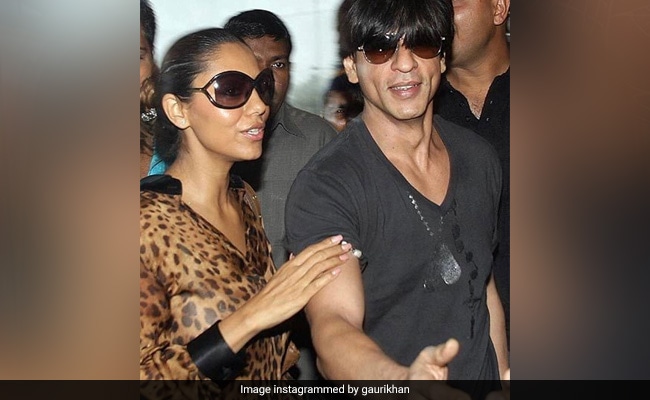 After IPL team Kolkata Knight Riders won Saturday's match against Delhi Capitals, Gauri Khan shared a memory from an IPL auction along with Shah Rukh Khan, on her Instagram profile. The picture was taken in which year exactly, Gauri Khan doesn't remember. In the picture, the star couple can be seen happily posing for the camera. SRK can be seen dressed in a black t-shirt, while Gauri looks stunning as ever in a leopard print top. Gauri Khan, tagging Kolkata Knight Riders, captioned the post: "We win ...Throwback pic IPL auction 2000 something." Fitness expert and Gauri Khan's friend Deanne Panday commented on the post: "How lovely are you looking."

Meanwhile, SRK and Gauri Khan's daughter Suhana, who has accompanied her parents to UAE, where the current season of IPL is taking place, shared a set of pictures on her Instagram profile and she captioned it: "Bye moving into this bathroom."

bye moving into this bathroom

Gauri Khan married Shah Rukh Khan in 1991. The star couple are parents to Aryan, 22 (their eldest child), Suhana and 7-year-old AbRam. Both Aryan and Suhana (20) are pursuing their higher studies abroad while AbRam stays with his parents in Mumbai.

Besides being a film producer, Gauri Khan is also an interior decorator and she has decorated homes for several Bollywood A-listers including Alia Bhatt, Varun Dhawan, Jacqueline Fernandez, Ranbir Kapoor and Karan Johar among others. She has designed restaurants like Arth and Sanchos and she also runs a store named Gauri Khan Designs in Mumbai. She will soon make her debut as an author with a book titled My Life In Design.

Shah Rukh Khan was last seen in Zero, co-starring Anushka Sharma and Katrina Kaif. SRK produced Netflix's Bard Of Blood, and Amitabh Bachchan and Taapsee Pannu's Badla. The actor will also produce the film Bob Biswas, starring Abhishek Bachchan. SRK has reportedly been signed for the Hindi remake of Quentin Tarantino's Kill Bill. However, he has not announced his association with the project as of now.