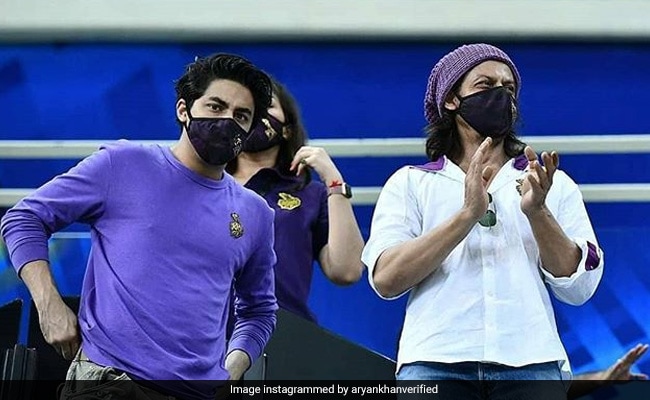 Shah Rukh with Aryan and Gauri in Dubai (courtesy aryankhanverified )

Few minutes into the Kolkata Knight Riders vs Rajasthan Royals IPL match on Wednesday, Shah Rukh Khan was spotted in the stands at the Dubai International Cricket Stadium. There's no denying that Shah Rukh Khan's got style. Last night, he sported a purple beanie to match the colour of the KKR jerseys and oh boy, he was every bit dashing. Accompanying Shah Rukh Khan at yesterday's match was his wife Gauri Khan and their son Aryan. Photos of the Shah Rukh enjoying the match with her family in Dubai have gone crazy viral on the Internet - Twitter particularly went into meltdown seeing Shah Rukh in the stands. Twitter was floored by what they called Shah Rukh's "new look" - he sported long hair, styled in a beanie.

Before we take a look at the tweets, here's what KKR posted about Shah Rukh Khan a day after the match: "Happy team = Happy SRK." That's right. Kolkata Knight Riders beat Rajasthan Royals by 37 runs.

Meanwhile, here's how crazy Twitter got about seeing Shah Rukh at the match.

After KKR won the match, Shah Rukh Khan put out this message, sharing Sachin Tendulkar's tweet: "Now anything I would say about KKR and the boys will mean nothing. The great man has spoken. Just so happy to see all in the team propping up the youngsters and making it count. Love you boys 'lots of pyaar from a little afar'." KKR is co-owned by Shah Rukh Khan, actress Juhi Chawla and her husband Jay Mehta.

Now anything I would say about @KKRiders & the boys will mean nothing. The great man has spoken. Just so happy to see all in the team propping up the youngsters & making it count. Love you boys 'lots of pyaar from a little afar' https://t.co/T8irMiHJi8

Kolkata Knight Riders has won two of the three matches the team has played in this season of IPL so far. KKR will next play against Delhi Capitals on October 3.