Ganpati Visarjan 2020: "Tradition. Family. Love. And my sweetest Lord Ganesha. Thank you for always protecting us from evil," Pinky Roshan captioned the post 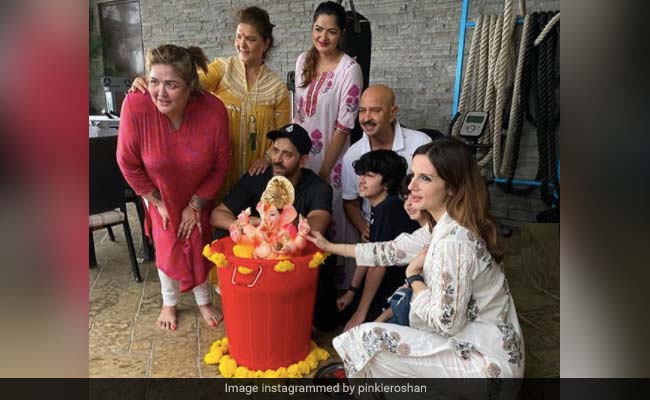 Hrithik Roshan and his family popped up on the trends list today after pictures from their Ganesh Visarjan festivities were released. The actor bid farewell to Lord Ganesha by immersing his idol in a water-filled bucket at home in Mumbai. Hrithik was accompanied by his father Rakesh Roshan, mother Pinky Roshan, ex-wife Sussanne Khan and their children Hrehaan and Hridhaan. Also present was Hrithik's sister Sunaina, indicating that all is now well after a family rift that raged on social media and off it last year. Pinky Roshan shared pictures from the family's send-off for Lord Ganesha on her Instagram - in the photos, the Roshans pose happily with their Ganpati idol.

"Tradition. Family. Love. And my sweetest Lord Ganesha. Thank you for always protecting us from evil," she captioned the post featuring all the family members. While sharing photos from the immersion ritual, she wrote: "#ganpatibappamorya #immersion...see you in 2021."

#Tradition . Family . Love . And my sweetest lord Ganesha . Thank you for always protecting us from evil

On Ganesh Chaturthi, Pinky Roshan posted pictures of a Bappa idol decorated with a garland at their residence. Take a look:

The photos hold no hint of the family feud that played out across social media last year. In June 2019, the Roshans were hit by public mud-slinging after Sunaina shared a series of tweets and then gave explosive interviews claiming that she was being harassed by her family, allegedly because of a romance they did not approve of. Sunaina also claimed she was being financially deprived by her family, singling Hrithik out for failing to buy her an apartment. Her claims were backed up on Twitter by actress Kangana Ranaut's sister Rangoli Chandel, who also accused the Roshans of physically attacking Sunaina. Kangana and Hrithik have long been at daggers drawn over a disputed romance that she says happened and he says didn't.

The Roshans maintained a dignified silence through Sunaina's allegations - Sussanne Khan, who was married to Hrithik from 2000 to 2014, posted a statement on social media in which she said Sunaina was in an "unfortunate situation."

Hrithik Roshan also addressed the allegations made by his sister later in an interview with Hindustan Times. "This is an internal, private and sensitive matter for me and my family. In didi's current state, it would not be correct of me to speak about her. It is an unfortunate situation that probably many families are going through and are as helpless as we are, owing to stigmas and an incredibly weak medical infrastructure in this country for such cases," the actor told the publication.

The Roshans did appear to have reconciled some months after Sunaina's meltdown - she was pictured with her family a few times and went on holiday to France with Sussanne in December.