According to Bran Stark's vision Daenerys Targaryen is Jon Snow's aunt. So now you have to make a choice. Is your response to all the googly eyes going to be awwww - or ewww? 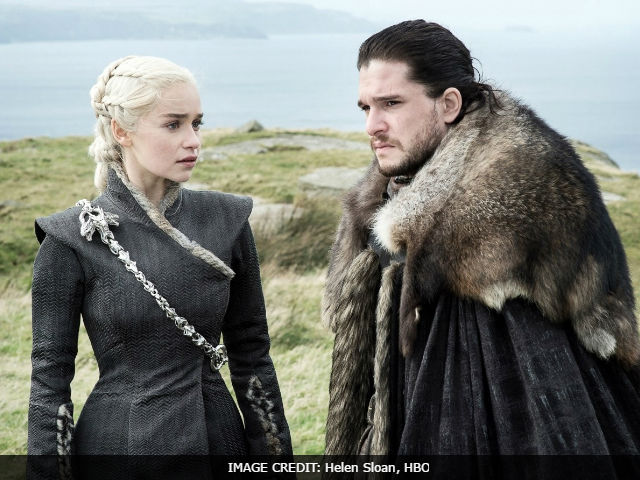 Washington: Jon Snow and Daenerys Targaryen are getting pretty cozy. On Sunday night's episode of Game of Thrones, she was his knight in iridescent outerwear when she flew in on Drogon to rescue the marooned men north of the Wall.

Despite her grand entrance, she had to flee the scene without Jon - and she was beside herself. She wouldn't leave Eastwatch in the hopes that he would appear. And then, like a miracle, he did. As they sailed back to Dragonstone, Daenerys rushed to his bedside quarters just in time to see him get stripped down, revealing a nice set of abs, not to mention his many scar reminders of getting stabbed by mutineers.

When he awoke to find her sitting beside him, they shared a moment. He called her Dany and told her he was prepared to "bend the knee," and then they stared into each other's eyes so long it seemed for a moment like maybe Jon had just died of hypothermia after all. But no, he was just smitten.

How cute are they? There's a lot to like about a potential romance: They're two of the most honorable leaders on the show; they're both dragon people; they make a striking couple. And besides, if they got together, we wouldn't have to choose who gets to be on the Iron Throne. They could both do it.

Last season, Bran's visions revealed that Jon Snow was actually the son of Lyanna Stark, not her brother Ned. In that case, his father is probably Rhaegar Targaryen - Dany's much older brother - who supposedly kidnapped Lyanna after she was betrothed to Robert Baratheon. Thanks to Gilly's eagle eye, we now know that Rhaegar annulled his first marriage to Elia Martell, perhaps so he could properly marry Lyanna, who may have been less a victim of abduction than a co-conspirator.

If that's true, then Daenerys is Jon's aunt. So now you have to make a choice. Is your response to all the googly eyes going to be awwww - or ewww?

Kit Harington, who plays Snow, weighed in on the pairing during an interview with Entertainment Tonight last month.

"Out of all the people in Thrones, Jon, of all people, is probably the least up for incest," he said. "But we don't know whether they're related."

That's true. The show hasn't explicitly stated who Jon's father is, but it's hard to imagine who else it would be. Rhaegar abducted Lyanna and hid her away in the Tower of Joy, then enlisted the best swordsman in the Seven Kingdoms to guard the place. The fact that Jon can get close to Dany's dragons - a Targaryen trait - practically seals it.

Besides, even if Jon isn't "up for incest," he has no idea he might be a Targaryen. As far as he knows, he's Ned Stark's bastard son. Only Bran Stark and Howland Reed could tell him differently.

Daenerys, meanwhile, might not blanch at the idea of marrying a nephew. The Targaryens wedded within their own family for many generations, and her parents were siblings. (This being a fantasy, she escaped the physical and mental defects that afflicted real-life royal houses that did the same.)

Promoted
Listen to the latest songs, only on JioSaavn.com
The Lannisters, at least, would approve. Now that Cersei is pregnant, she's vowed to be honest with the world about the fact that her twin brother is the father. Does that mean incest will lose its taboo in Westeros? Maybe. But it's still pretty icky for the modern-day audience, which means Jon better figure out his parentage - and fast.