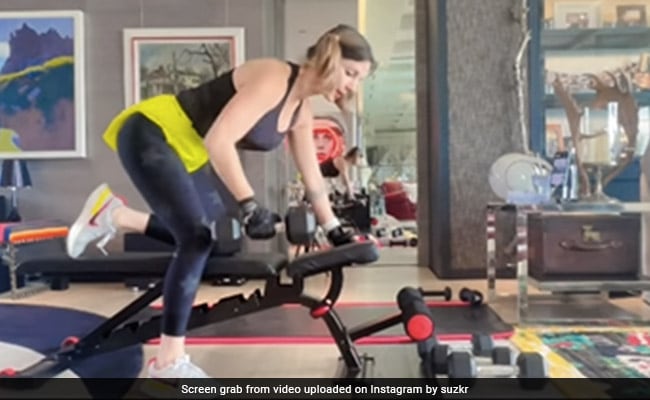 Sussanne in a still from the video. (courtesy: suzkr)

Nothing can stop Sussanne Khan from working out, not even vacations or weekends. She will chase those “endorphins every single day.” Sussanne has posted a video of herself sweating it out in the gym space and her workout routine is making us look bad. She is doing arms and core workouts with ease. In the caption, the interior designer has shared a “note to self” that read, “Hold your tongue now... and let them all listen to your silence…Note to self...continue to chase those endorphins every single day.” Sussanne has also added the hashtags “hammering away” and “muscle is my friend” along with some hammer, biceps and dice emojis. Replying to the post, actress-model Diandra Soares wrote, “Yass kween [queen]” and dropped a bunch of heart-eye and red heart emojis.

Sussanne Khan is not the only one who has marked her attendance in the gym today. Actress Karishma Tanna  too shared a post-workout picture of herself with a great caption. Actress Karishma Tanna and her “partner in crime” husband Varun Bangera gave major couple workout goals. The two, in the video, can be seen nailing arms, thighs, shoulders and core workouts. “Just beat it,” wrote the actress and added the hashtags “love,” “workout”, and “partner in crime.”