From Baahubali Star Tamannaah's Fitness Diaries. See What She Posted 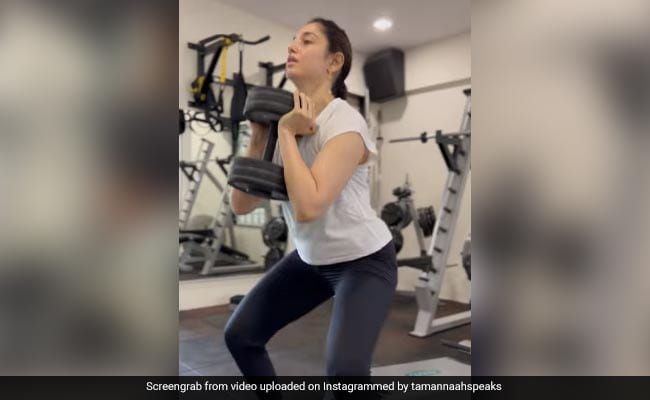 Tamannaah in a still from the video. (courtesy: tamannaahspeaks)

Baahubali actress Tamannaah loves to share posts from her fitness diaries on her Instagram profile. Her latest addition is not any different. On Wednesday, the actress shared a video, in which she can be seen lifting weights and doing squats with utmost ease. She accompanied the video with the track All That Glitters by Earl. "Meet Ms B," Tamannaah captioned the post. The comments section was filled with remarks from her Instafam. "Fitness freak Tammu," wrote a fan. "Queen," added another. "Looking great Tam. Keep rocking," read another comment.

Tamannaah has quite a bit of a reputation as a fitness enthusiast. Sometimes, the actress dances her way to fitness. A few months ago, she started a social media challenge called #KodtheDanceChallenge. She shared a video of herself dancing to the track Kodthe from the film Ghani. She captioned it: "Take more chances. Dance more dances. I'm dancing to the beat of Kodthe. It's your turn next! Challenging both of you to take up the #KodtheDanceChallenge."

Aishwarya Rajinikanth's Midweek Mood Is "Messy Hair And No Makeup"