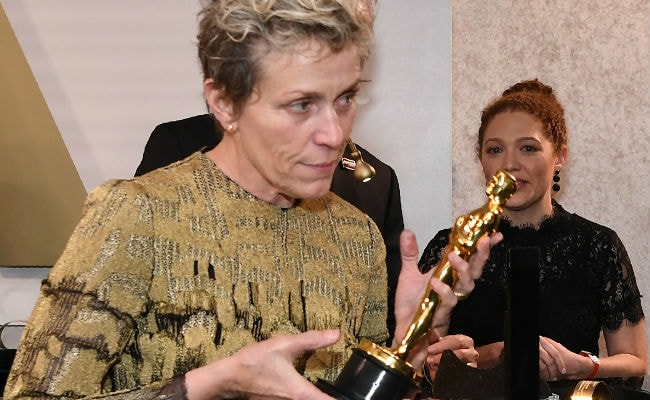 Los Angeles: Oscar-winner Frances McDormand had her statuette stolen at a post-show party by a man who allegedly snatched it from her table before he was arrested, police and witnesses said on Monday. Frances McDormand, 60, won Best Actress at Sunday's awards for her role as a rage-filled mother seeking justice for her murdered daughter in Martin McDonagh's Three Billboards Outside Ebbing, Missouri. "Security at the Governors Ball are looking for this guy, who grabbed Frances McDormand's Oscar and ran out with it," said New York Times writer Cara Buckley, who was at the event and live-tweeted the drama.

She said a photographer working for celebrity chef Wolfgang Puck - who was providing the catering - stopped the man and seized the Oscar, before the thief disappeared back into the ball.

The actress "had set it down and was chatting" when it disappeared, according to Buckley, who added that the actress had said to "let him go."

"We can confirm that an incident occurred at the Governor's event. There was an arrest made of a Terry Bryant for grand theft," a spokeswoman for the Los Angeles Police Department told AFP.

She wasn't able to give further details, except to confirm that the 47-year-old suspect had a ticket for the party.

Variety magazine reposted a Facebook Live video it said showed the suspect brandishing the golden statuette he says he won "for music" and joking: "Got this tonight! This is mine. We got it tonight, baby."

The African American man, dressed in a tuxedo with hair held back in hairpins, is seen in the 165-seconds of footage posted to the page of a Terry Bryant Djmatari kissing the trophy and allowing bystanders to touch it.

It was the second time McDormand had bagged the best actress statuette following her win for "Fargo" 21 years earlier, and her acceptance speech was a highlights of the evening.

Frances McDormand, whose representatives didn't immediately respond to a request for comment, delivered a rallying cry for the #MeToo movement against harassment and gender double-standards.

Placing her statuette on the stage, an animated McDormand asked all women nominated across categories to stand up and be counted.

It was otherwise a relatively uneventful show, however, and early ratings for ABC's telecast showed the US audience at an-all time low during the 5:00 pm (0100 GMT) to 8:00 pm ceremony, according to US media.

The near four-hour broadcast, hosted by Jimmy Kimmel, averaged an 18.9 overnight Nielsen rating - a number equating roughly to the percentage of America's estimated 118.4 million households that tuned in.

That is a 16 percent drop on last year, which will go down in infamy for its disastrous climax, when the wrong movie was briefly awarded best picture due to a mix-up with the envelopes.

Experts stress that preliminary ratings are not adjusted for time zone differences, meaning the live west coast audience is not accurately reflected in the overnight numbers, as they only measure primetime hours.

The 2017 Academy Awards, which earned a 22.4 overnight rating, ended up drawing 32.9 million viewers. It was the second lowest in Academy history after the 2008 show, hosted by Jon Stewart, pulled in just 31.8 million.

"It was a show in which nearly every winner had been exhaustively pre-ordained by the endless awards season, but one in which first-time and long-overdue winners still brought the crowd to its feet," the Hollywood Reporter's Daniel Fienberg said in a review.

Promoted
Listen to the latest songs, only on JioSaavn.com
All three big set-piece television events so far - the Golden Globes, the Grammys and the Super Bowl -- have all returned lower audiences than in 2017.