Salman Khan, You Should Seriously Think About This Wedding Proposal 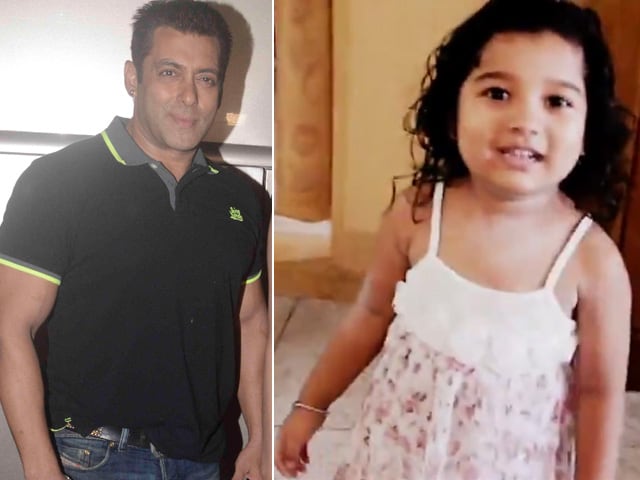 Salman Khan photographed in Mumbai and Nitya in a still from the video.

New Delhi: A three-year-old's declaration of love sweetened Salman Khan's Tuesday afternoon. In a video that the 49-year-old described as 'How Sweet' on Twitter and Facebook, little Nitya states, "I want to marry you Salman Khan." She seems pretty sure that the actor, pushing 50 as Bollywood's most eligible bachelor, will be her husband.

When her mother asks her if she even knows what marriage is, the three-year-old promptly replies: "It is like happy birthday!"

Distance, school and the difference in age and height pose no problems for her. The only obstacle might be a disapproving father - just like in the movies. "Papa 'nahi' bolenge," Nitya says. To seal the deal, Nitya performed a short sequence of Munni Badnaam Hui, Malaika Arora Khan's item song from Dabangg.

Salman has so far proved immune to the lure of marital bliss and resistant to any efforts on the part of the world at large to get him hitched. A couple of years ago, his friend Aamir Khan told the press that the only way Salman would get married was if he were tied up and dragged to his own wedding.

We suspect that there is heartbreak in Nitya's future.

Last month, right after the release of Bajrangi Bhaijaan, director Kabir Khan had shared a video of another little girl named Suzi sobbing at the theatre and could barely mouth, "I love you Salman." (Also Read: Salman Khan Made a Little Girl and a Grown Man Cry)

Salman has always been a hit with kids, including his six-year-old Bajrangi Bhaijaan co-star Harshaali Malhotra who is also seen in a behind-the-scenes video admitting she loves the actor.