For Mom Aishwarya Rai Bachchan, Daughter Aaradhya 'Comes First, Everything Else Is Secondary' 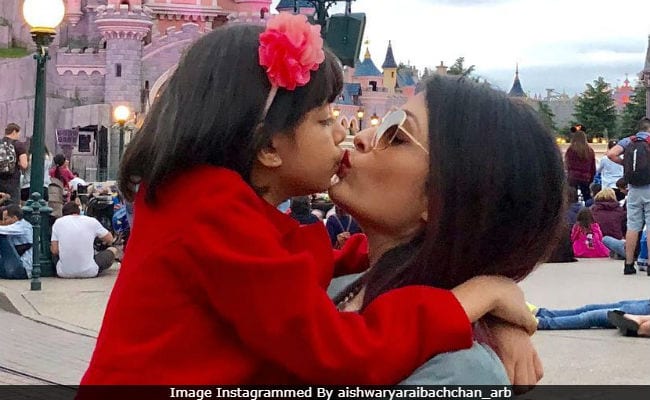 Actress Aishwarya Rai Bachchan opened up about dividing her duties between being a mother and a Bollywood star in an interview to news agency IANS. Aishwarya, who is married to actor Abhishek Bachchan, is a mother to six-year-old daughter Aaradhya and after her birth, the actress' 'priorities changed completely.' Aishwarya, who has well-managed her duties, told IANS, "It's something I've grown up with. From the time I was 18, I've been juggling with many responsibilities. My day begins at 5.30 am. It has been that way from the time I remember. Of course, after Aaradhya my priorities have changed completely. She comes first, everything else is secondary."

Aishwarya also credited Abhishek, who is a 'supportive husband' and her mom Vrinda Rai, who also takes care of Aaradhya in her absence. "Every home maker who is a working woman is a hero. It requires a lot of juggling with time. And a supportive husband, which I luckily have."

A post shared by AishwaryaRaiBachchan (@aishwaryaraibachchan_arb) on Jun 30, 2018 at 10:04am PDT

While many of the star moms keep nannies for their children, Aishwarya has a different perception altogether about it. Aaradhya does have a nanny but Aishwarya likes to do things on her own for her daughter. "Aaradhya does have a nanny. In fact, I am told I should have two of them because the one that I have, tends to take off on long holidays. But it doesn't really matter. I like doing everything for Aaradhya myself, though with my kind of schedules it is not always possible to do so."

"Do you know Aaradhya saw her mother's film for the first time? I mean, she had of course seen me on television and doing songs. But Fanney Khan is my first film where she actually sat through the whole film," Aishwarya told IANS.

Asked about what did Aaradhya think of her mom's performance? Aishwarya revealed, "I think her smiling eyes said it all. She had actually seen me shoot a part of my song in Fanney Khan. So when she heard there was a screening, she expressed a wish to see the film with all her friends and their parents. So all her friends came with their parents and had a good time. I was happy to let Fanney Khan be the first film Aaradhya watches. It has a positive message for viewers of all ages and there's nothing in it that children cannot watch."

Aaradhya comes from a family of prominent film stars. Her grandparents Amitabh and Jaya Bachchan are big movie stars and so are her parents. So, what's the atmosphere at home for Aaradhya? Aishwarya said, "Aaradhya is constantly singing and dancing at home, sometimes to my songs, sometimes to her father's and her grandfather's songs. It's a normal household. We're trying to keep the atmosphere around Aaradhya as normal as possible."

A post shared by AishwaryaRaiBachchan (@aishwaryaraibachchan_arb) on Jun 3, 2018 at 11:43am PDT