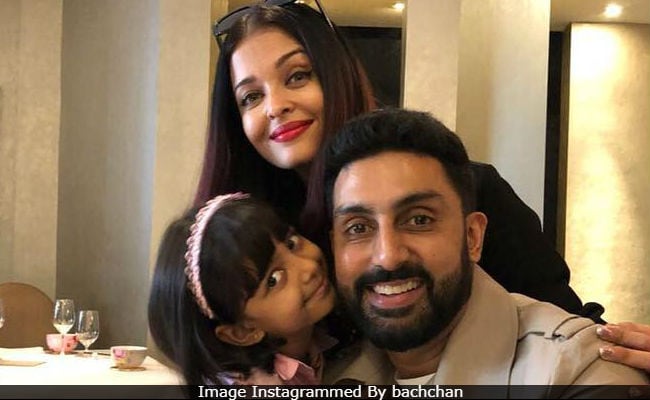 And... Abhishek Bachchan, Aishwarya Rai and their little daughter Aaradhya's 'summer holiday' begins. The trio have finally united at a common place. On Tuesday evening, Abhishek shared a fabulous photo with Aishwarya and Aaradhya and it's making us very happy. "Then there were three," wrote Abhishek, adding the hashtag 'summer holidays.' Oh, did we forget to tell you that the picture courtesy goes to Amitabh Bachchan? Yes, the 75-year-old megastar has captured the beautiful moment. In the picture, Aishwarya holds Abhishek and Aaradhya from the back. Aaradhya is dressed in pink (her favourite colour). Abhishek hasn't mentioned their holiday destination. All this while, Aishwarya and Aaradhya were in Paris while Abhishek attended one of the matches of FIFA World Cup 2018 in Russia.

Then there were three! #SummerHolidays : @amitabhbachchan

(Dear Abhishek Bachchan, thank you for this million dollar picture).

Aishwarya and Aaradhya left for Paris earlier this month. Aishwarya shot for Swiss brand Longines' new collection there and after wrapping up the work, they toured the French capital. Luckily, they also got to witness France's win in FIFA World Cup final against Croatia.

A post shared by AishwaryaRaiBachchan (@aishwaryaraibachchan_arb) on Jul 15, 2018 at 11:55am PDT

My Princess Angel's Happiness means the World to me My Aaradhya...My LIFEMy Eternal LOVE

A post shared by AishwaryaRaiBachchan (@aishwaryaraibachchan_arb) on Jul 11, 2018 at 3:18am PDT

Meanwhile, Abhishek checked into Russia with sister Shweta Bachchan Nanda and her kids Navya Naveli and Agastya, last week. They were joined by Amitabh Bachchan there.

Abhishek and Big B together had watched the FIFA World Cup semi-finals.

Aishwarya Rai Bachchan's next film is Fanney Khan, in which she co-stars with Anil Kapoor and Rajkummar Rao. It hits the screens on August 3. Abhishek is awaiting the release of Manmarziyan. Amitabh Bachchan has Thugs Of Hindostan, Brahmastra and Badla in the line-up.