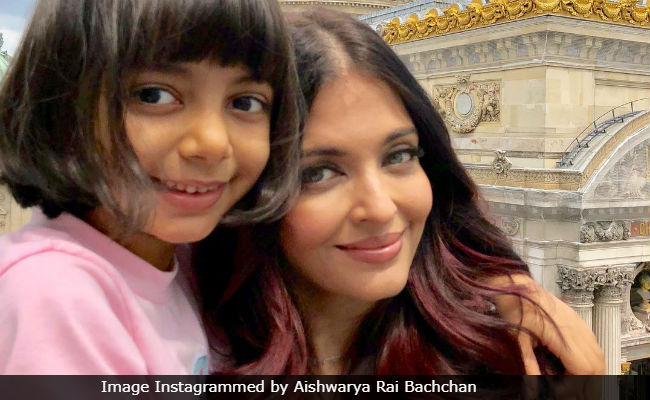 Just when we thought that Aishwarya Rai Bachchan's Instagram posts couldn't get any better, the actress treated her fans with yet another million-dollar picture with none other than her adorable 6-year-old daughter Aaradhya. Aishwarya's Paris diaries keep getting better - yesterday's post presented Aaradhya's great posing skills (remember that pout in the picture?), Monday's post stole our hearts with her bright smile. In the picture, the mother-daughter duo can be seen smiling as they posed outside their hotel room in Paris (and what a view!). Aishwarya wrote: "Gorgeous view of the Palais Garnier Opera House from our room at the Paris Le Grand Intercontinental." The picture has over 3 lakh likes on Instagram. Comments such as "Two angels" and "like mother like daughter" were seen on the post.

A post shared by AishwaryaRaiBachchan (@aishwaryaraibachchan_arb) on Jul 16, 2018 at 1:32am PDT

On Monday, Aishwarya also shared multiple pictures, which appear to be from a photoshoot for a watch brand she promotes. The pictures were taken inside the Palais Garnier Opera House and we must tell you that Aishwarya, dressed in a dramatic black gown, looks absolutely enchanting in the pictures.

Check out the pictures here, you can thank us later:

A post shared by AishwaryaRaiBachchan (@aishwaryaraibachchan_arb) on Jul 16, 2018 at 2:57am PDT

Aishwarya Rai Bachchan, who is in Paris for work commitments, has also been accompanied by her mom Vrinda Rai on the trip. Despite her busy schedule, the actress has been equally adept at spending quality time with Aaradhya and she has been treating her fans with oh-so-adorable pictures. From their Eiffel Tower visit, to the dreamy Disneyland pictures, to enjoying the fun-filled roller coaster ride, Aishwarya's latest Instagram posts are a treat to the eyes.

Here are some of the pictures we are talking about:

A post shared by AishwaryaRaiBachchan (@aishwaryaraibachchan_arb) on Jul 10, 2018 at 1:20am PDT

A post shared by AishwaryaRaiBachchan (@aishwaryaraibachchan_arb) on Jul 7, 2018 at 11:16am PDT

How can we not mention this picture - "My princess angel's happiness means the world to me. My Aaradhya...My Life... My eternal love," read Aishwarya's caption.

My Princess Angel's Happiness means the World to me My Aaradhya...My LIFEMy Eternal LOVE /a>

A post shared by AishwaryaRaiBachchan (@aishwaryaraibachchan_arb) on Jul 11, 2018 at 3:18am PDT

On the work front, Aishwarya Rai Bachchan will be next seen in Fanney Khan, co-starring Anil Kapoor and Rajkummar Rao. She last made an onscreen appearance in the 2016 film Ae Dil Hai Mushkil.