For Ira Khan And Boyfriend Nupur Shikhare, What Started Off As Kick-Boxing Ended In A Hug

After a few attempts, Ira can be heard saying "sorry" for hitting Nupur and then giving him a surprise hug. 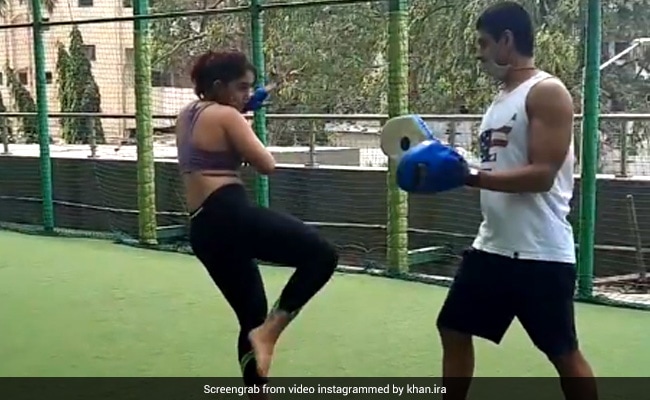 Ira Khan in a still from her video (courtesy khan.ira)

Aamir Khan's daughter Ira Khan, who often paints Instagram red with her loved up posts for boyfriend Nupur Shikhare, added one more to the list. On Tuesday, Ira shared a video of her practising kick-boxing with Nupur Shikhare, who is a fitness trainer. What started off as a kick-boxing session, ended up being a mushy hug session. After a few attempts, Ira can be heard saying "sorry" for hitting Nupur and then giving him a surprise hug. Sharing the video, here's what Ira Khan wrote in the caption: "Kick-boxing is clearly not my thing. What are my arms even doing? Also... dropping Popeye is clearly not my thing either." Popeye is Nupur Shikhare's moniker on Instagram.

Here, take a look at Ira Khan trying her luck at kick-boxing. So, how did she do?

On Instagram, Ira and Nupur are often spotted working out together. "That's one way to keep me on my toes," she captioned one such post.

A little ahead of Valentine's Day, Ira Khan dedicated this post to Nupur Shikhare, writing: "It's an honour to make promises with and to you."