"A few (minutes) ago I yawned, thought lets to bed but the opening of Tumblr, provocative, urges you to say to print to post," wrote Amitabh Bachchan 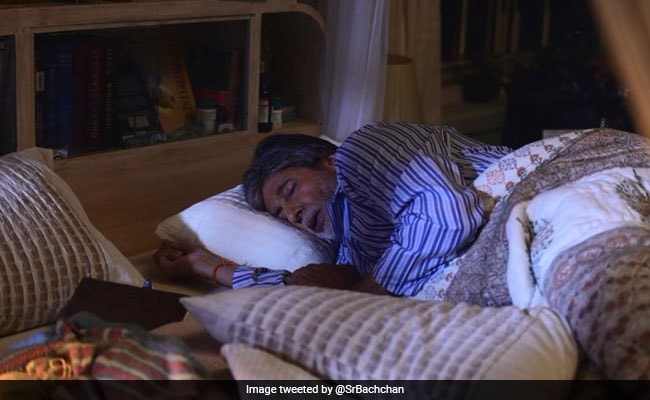 Amitabh Bachchan loves his Extended Family - the EF - so much that he can let go off sleep for them, just for a few minutes though. On Tuesday night, Mr Bachchan shared a photo of him sleeping on Twitter and elaborated on it on his official blog. Big B said despite being super sleepy, he decided to address his EF in a brief message on Tumblr. He promises to make up for it sometime later. "A few (minutes) ago I yawned, thought lets to bed but the opening of Tumblr, provocative, urges you to say to print to post . The EF greater than all else, especially the yawn. So here, but reserved and short... will make up... perhaps when at work. For now it's goodnight."

Amitabh Bachchan, at 78, is one of the busiest of Bollywood stars. He recently announced his second collaboration with Deepika Padukone for the Hindi remake of Hollywood hit The Intern. Rishi Kapoor was to feature in the role originally played by Robert De Niro. After Rishi Kapoor's death last year, Big B will play the part. Deepika has been roped in for the role played by Anne Hathaway.

Apart from The Intern, Amitabh Bachchan has an impressive line-up of films ahead. In Chehre, he plays the role of a criminal lawyer and co-stars with Emraan Hashmi. Big B also stars in Aya Mukerji's fantasy film Brahmastra, co-starring Ranbir Kapoor and Alia Bhatt. In Jhund, he has been cast as a football coach. Mr Bachchan also has Mayday in his line-up. Mr Bachchan, who had contracted COVID-19 last year, also recently tweeted about getting coronavirus vaccination.

Twinkle Khanna's Poetic Post: "A Series Of Todays, All The Same"