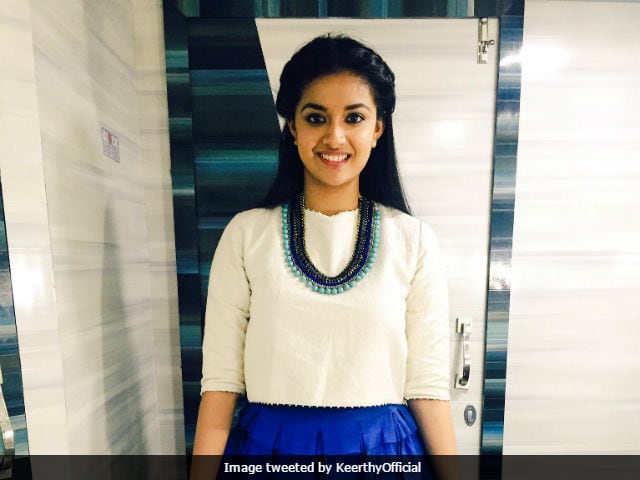 New Delhi: On the occasion of International Women's Day, the first poster of the movie titled Mahanati was released by its makers on social media. The movie is a biopic on south's legendary actress Savitri. Keerthy Suresh, 24, confirmed on social media that she will be seen portraying the role of Savitri. Samantha Ruth Prabhu will be seen narrating her story in the film. Savitri made her debut with the 1952 Telugu film Pelli Chesi Choodu. She received the Rashtrapati Award for her performance in the Telugu film Chivaraku Migiledi (1960). The actress had also produced and directed the Telugu film Chinnari Papalu which earned her the state Nandi Award For Best Feature Film. She was also honoured at the 30th International Film Festival of India.

Here it is..... Our first step on this epic journey.
Come be a part of history #Mahanati##HappyWomensDay#womensdaypic.twitter.com/SdlEBA4ZoO

I'm blessed to play the legendary #Savithri Garu in #Mahanati along with @Samanthaprabhu2@VyjayanthiFilms#NagAshwin#HappyWomensDaypic.twitter.com/Ie9trea3Oj

Mahanati has been directed by Nag Ashwin. The filmmaker is known for his 2015 Telugu film Yevade Subramanyam which featured Nani in the lead role.

Nag Ashwin earlier told news agency IANS: "With massive set pieces, the film will be unlike anything we've explored in Indian cinema."

"There have been countless actresses over the last 80 years in Telugu cinema but none have earned the title of Mahanati, and even today it has solely been reserved for Savitri," he added.

The shoot for the film is likely to begin later this year. Mahanati is being produced by Vyjayanthi Movies and will be released in Telugu and Tamil simultaneously. The makers of the movie are also in talks with Nivin Pauly to be part of the project, IANS quoted a source.

Promoted
Listen to the latest songs, only on JioSaavn.com
Meanwhile, Keerthy Suresh will also feature in Thaana Serndha Kootam, directed by Vignesh Shivan.