"Find Somebody Else To Nitpick On": Ishaan Khatter Responds To User Questioning His #BlackOutTuesday Post

"This is the time to show some solidarity for the entire world as one, not to find faults in those who are doing it," wrote Ishaan Khatter 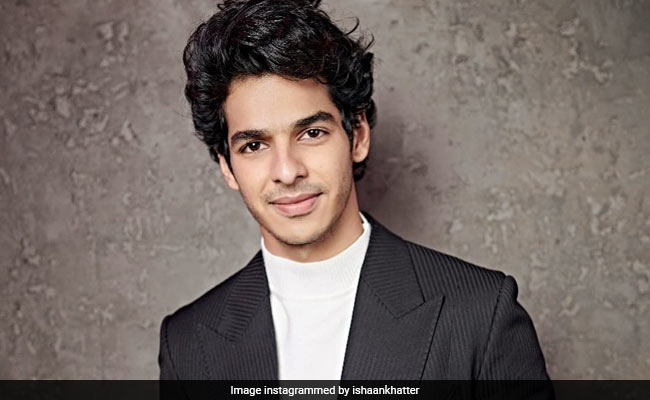 Actor Ishaan Khatter doesn't "owe an explanation" to anybody but he chose to respond to a user, who questioned his #BlackOutTuesday post. On June 2, social media was flooded with users posting black screens with the hashtag #BlackOutTuesday as a mark of protest against police brutality in the US and to condemn the death of George Floyd, a man of colour, who died after being pinned down by an officer. On Ishaan Khatter's #BlackOutTuesday post, a user left this comment: "Didn't have the guts to speak out when the Delhi police did the same thing to unarmed students but now wow." Replying to the user, Ishaan pointed out a correction and said he spoke up against police brutality during the anti-CAA (Citizenship Amendment Act) protests in the country earlier this year, glimpses of which are available on Ishaan's Instagram highlights: "Not that I owe you or anybody an explanation, but I did. Find somebody else to nitpick on. This is the time to show some solidarity for the entire world as one, not to find faults in those who are doing it."

One of Ishaan's Instagram stories under the highlight titled "India" from February reads: "Cannot possibly fathom such disturbing attacks taking place so close to home. No matter what your 'opinion' is, violence of this nature is highly condemnable." 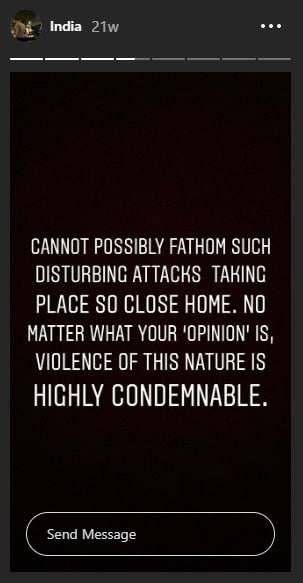 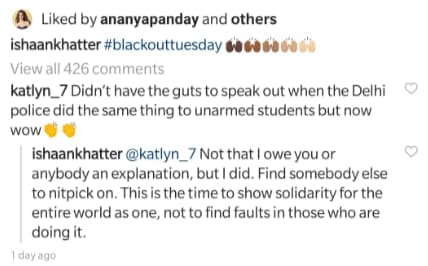 In January, when anti-CAA protests ripped through the country, police brutality was reported from several parts of the country, particularly from the national capital. Disturbing videos of policemen thrashing students at Delhi's Jamia Millia University after a protest march against the CAA had cropped up on the Internet. Ahead of that, JNU students, who were also part of anti-CAA protests, were attacked by a masked mob with sticks and rods leaving many severely injured. In January, actress Deepika Padukone made headlines by visiting JNU, where she stood in solidarity with students.

As several Bollywood celebrities joined the #BlackOutTuesday protest on social media, posting black screens, actor Abhay Deol's post, calling out "woke Indian celebs" for their reluctance to comment on pressing issues such as injustice and oppression at home, struck a chord with Twitter. On Wednesday, Mr Deol posted a page with these three hashtags written on them: "#migrantlivesmatter, #minoritylivesmatter, #poorlivesmatter", along with a note that said: "Now that "woke" Indian celebrities and the middle class stand in solidarity with fighting systemic racism in America, perhaps they'd see how it manifests in their own backyard?"

Ishaan Khatter made his acting debut with 2017 film Beyond The Clouds, helmed by Iranian filmmaker Majid Majidi. He then stepped into Bollywood with Dhadak in 2018, which marked the debut of Sridevi's daughter Janhvi Kapoor. Ishaan has two films in the line-up - Khaali Peeli with Ananya Panday and Mira Nair's A Suitable Boy, co-starring Tabu.