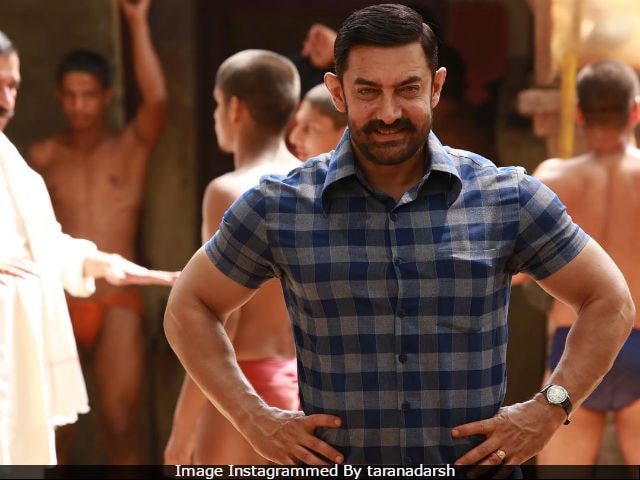 New Delhi: The Filmfare Awards effectively redeemed itself on Saturday by naming Aamir Khan, 51, Best Actor for his remarkable performance in Dangal. Decades ago, Aamir swore off award shows after he lost the Filmfare Best Actor prize to Shah Rukh Khan - in 1996, SRK was awarded for playing Raj in Dilwale Dulhania Le Jayenge over Aamir as Munna in Rangeela. Many, foremost among them Aamir, considered that the Rangeela performance was superior to the DDLJ one and the credibility of Indian award shows was forever dented. This changed on Saturday, when Aamir and Alia Bhatt won the two top acting honours, for Dangal and Udta Punjab. Aamir doesn't attend award shows but Alia, who is all of 23, does and happily posed with her trophy.

Alia's performance as the abused and unnamed Bihari migrant in drug drama Udta Punjab has been sweeping award shows. The actress spent all of Sunday responding to congratulatory messages on Twitter, like these:

@aliaa08 Heartiest congratulations for #UdtaPunjab. It was one of your best roles till date.

@aliaa08 Once u become fearless life becomes limitless. Congratulations to u my little big girl!! pic.twitter.com/Ypn63hPyXp

Congrats @aliaa08 So so so well deserved!!! Many more to go girl

Haha thank you for dressing me up for my performance Manish! Wouldn't be possible without you! https://t.co/euds6x71ti

Alia and her Udta Punjab co-stars - Shahid Kapoor and Diljit Dosanjh, who won the Critics Award for Best Actor and Best Male Debut respectively - also congratulated her and each other:

Congratulations to @aliaa08 and @diljitdosanjh for the much deserved awards. Here's to cinema with content. Say no to drugs. #whosthegabru

Last week, when the nominations for the Filmfare Awards were announced, Twitter was enraged by the omission of Akshay Kumar in the Best Actor category, which included a nod for Salman Khan's role in Sultan. Also criticized was the overlooking of Dangal's female cast - actresses Fatima Sana Shaikh, Sanya Malhotra and Sakshi Tanwar.

Promoted
Listen to the latest songs, only on JioSaavn.com
In its winners' list, however, Filmfare somewhat mended its reputation by awarding Sultan just once for the song Jag Ghoomeya and for heaping prizes on Dangal, Kapoor And Sons, Udta Punjab and Neerja.

The Filmfare Awards for 2017 were held in Mumbai last Saturday, and co-hosted by Shah Rukh Khan and Karan Johar.